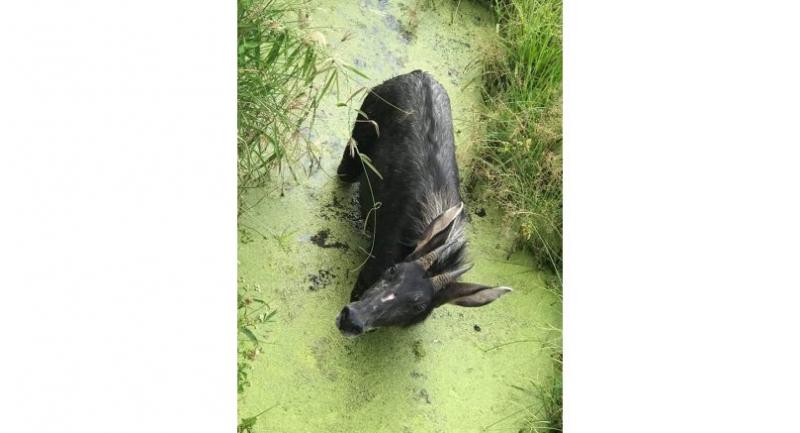 An endangered 60-kilogram female serow that had wandered out of conserved forestland and onto people’s farms was rescued from a rice field in Uthai Thani’s Lan Sak district this week.

Tham Prathoon wildlife sanctuary head Jaras Khamphaeng said the lost serow (a wild goat-like or antelope-like mammal) is estimated to be 5-7 years old, and was found on Monday in the rice field of Ban Pa Kha (Moo 9) in Tambon Pradu Yeun.

Staff members from the Huai Kha Khaeng Wildlife Breeding Station then caught it by shooting it with a tranquiliser dart. A veterinarian also collected a blood sample for lab tests.

The animal was brought to the sanctuary for surveillance and treatment before eventually being returned to the forest, Jaras said.

A serow is one of 15 “reserved species” under Thai law that cannot be hunted, traded or kept by anyone. The Convention on International Trade in Endangered Species of Wild Fauna and Flora (CITES) includes serows in its Appendix I listing, which designates species threatened with extinction due to being hunted for horns, bones or oil. Serows have also seen their natural habitat radically shrink due to hill farming.