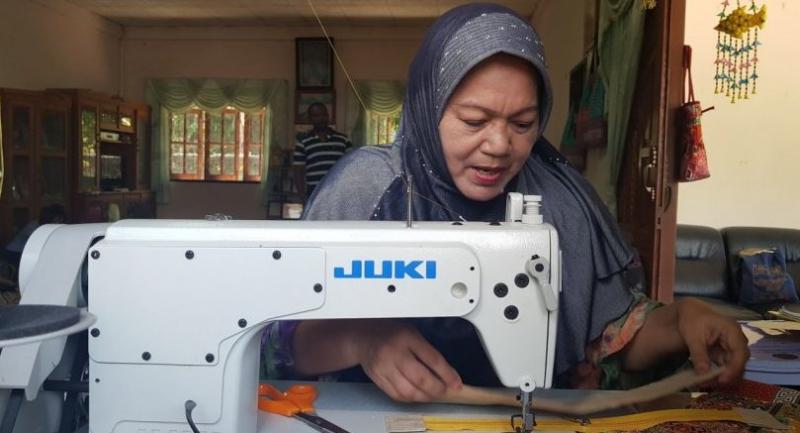 By Jintana Panyaarvudh
The Nation
Pattani

IT IS NOT EASY for Thai-Muslim housewives, who normally stay at home and take care of children, to continue supporting themselves after the death of their husbands.

The life of Rattana Duereso, a Thai-Muslim villager in Pattani’s Muang district, is no exception.

Rattana lived her life in darkness for three years after her husband, a soldier, was shot dead by insurgents in 2005. She feared leaving home and kept all the lights switched off, as she was afraid she might be attacked like her husband.

Then one day she was introduced to conduct research for an “alternative activity” project for a payment of Bt5,000. So, the widow decided to leave her comfort zone and apply for the opportunity.

Her life has been transformed since then. From being a housewife with few skills, she’s now the leader of a group that can earn up to Bt100,000 in some months. “That was the first time I realised that I’m capable of earning a living for myself,” the 61-year-old said.

Supported by the Thailand Research Fund (TRF) and launched in 2008, the project aimed to entice villagers to join forces to conduct their own research, or take up activities they could do together. The intention was to strengthen relationships in communities.

The project was designed to get villagers deeply involved in the research process since they would be the ones benefiting directly.

Research funding was open to orphans, widows and religious leaders, with applicants getting Bt5,000 if their projects were approved.

The target groups could come up with preferred activity, or focus on what their village needed and then submit their proposal to a provincial committee in the southern provinces of Pattani, Yala and Narathiwat. Rattana applied for research funding in its first year and later founded the “Makrud Wan” (sweet kaffir lime) group consisting of six members made up of single mums, elderly women and youths.

In the beginning, her group produced baskets to sell, but learned sewing later and can now produce dresses and bags from the remaining cloth.

Rattana’s story is a good |example of women who have lost their husbands in the restive South, but are finally able to boost their quality of life.

“The project is the best medicine to cure my heart and soul, because it allows me to stay connected to others in my community,” Rattana said.

“This project inspires me to move forward and I no longer feel abandoned. It motivates me and makes me feel my life is worth something.”

Though the research project was wrapped up over five years ago, Rattana’s group has remained strong and still comes together to work.

Piya Kittaworn, a retired lecturer responsible for the project, concedes that the idea of giving Bt5,000 to villagers had been criticised initially, but then he points to the fruitful output of the project.

Despite low seed money, the project has helped to create social bonds and enabled women to earn a living, as well as raised their confidence, Piya said.

Under the 11-year-long project, TRF granted funding to a total of 44 projects in the South.

Due to the success of that first project, TRF last October launched a similar new research project under the theme of eradication of inequality in Yala and Pattani, said Piya.

Each applicant will receive Bt5,000 for their project to promote equality in their community.