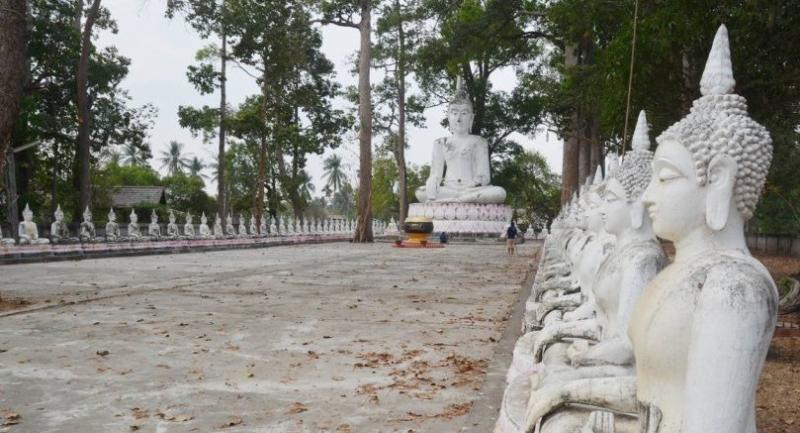 It can be found in Savannakhet province and today forms part of one of the most famous and amazing Buddhist temples.

The Hortai Pidok was originally constructed in the 17th century under the supervision of Abbot Lakkhampha. It was rebuilt in the 19th century as part of the Nonglamchanh Temple and restored from 1990 to 2001, led by Abbots Kiew, Chuang, Nuan and Phomma.

Hortai Pidok houses some 4,000 books containing 361 different stories, which are kept in good condition by the monks and locals. A Thai-funded project recently restored the structure as a classic example of Lao religious architecture, according to the weArelao website.

Last month I visited the wooden temple for the first time and discovered its astonishing beauty and artistic design.

All visitors must take off their shoes before entering the temple, as well as their socks.

The old men we encountered told us different stories about the temple, why people have to take off their shoes and socks, and why it is so greatly respected.

This temple is situated in an area that was heavily bombed during the Indochina war.

Locals said that although many bombs fell, the structure remained unscathed, which is why it is revered so highly.

Shoes and socks must be removed because of the reverence with which people treat the temple. When the main hall of worship was first opened, the ceremony that took place encompassed all parts of the temple. In the past, a swarm of bees inhabited the place and had a tendency to sting people when they entered, especially those who didn’t remove their footwear.

Even small children take off their shoes every time they enter this sacred place.

On the same day that we visited, a Nong Pha Pa involving visitors from other provinces was taking place so there were a lot of people present.

The temple is situated on a sizeable plot of land in the middle of a lake, giving it the name Nong Lamchanh. Nong means pond and Lamchanh is the name of the village.

The Hortai Pidok is a small wooden structure that stands in the lake and is supported by at least 30 strong wooden poles.

On the other side of the lake is a park that contains 100 white Buddha statues that are placed around a large statue in the middle.

For me this was an extraordinarily beautiful temple and I felt so at peace as I wandered through it. I could sense its age and the solidness of its construction. There aren’t many other places in Laos that are built entirely of wood, so this was something really special.

How to get there: Take Route 9B to Route 13, and head south to the Ban Lak 35 bus station. Turn left, travel about 25 km to Ban Taleo, where the main road ends. Turn left and go about 18km to reach Ban Lamchan and the library. Those visiting the Monkey Forest can walk a 3-km trail to the library.