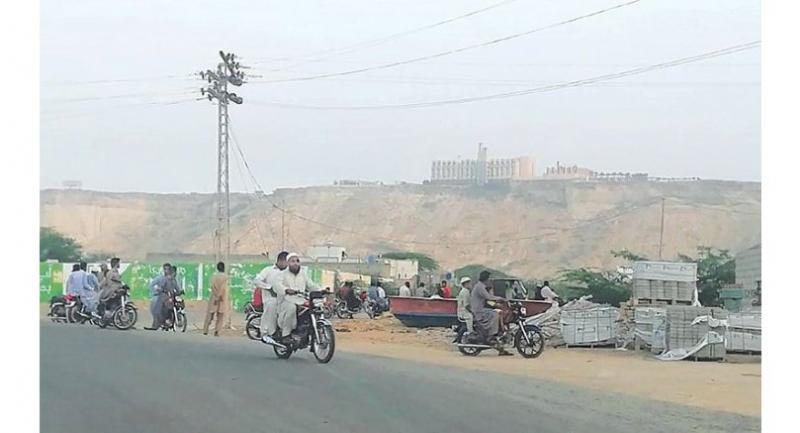 PEOPLE watch the Pearl Continental hotel, located on a hill (top back) in Gwadar, as the gunfight between assailants and security personnel continues on Saturday. //AFP

Official sources said that the attackers wearing uniform of security forces and armed with modern weapons barged into the hotel and opened fire after taking the hotel staff hostage. Security guards deployed at the hotel offered resistance but three of them were shot dead by the attackers. Two of the deceased were identified as Rasheed and Zahoor.

Gunshots fired by the assailants also left Anwar, Ali Raza, Jawed and an unidentified man injured who were taken to hospital.

Security forces rushed to the hotel and launched an operation. According to AP news agency, the four attackers have also been killed.

The banned Baloch Liberation Army’s (BLA) Majeed Brigade claimed responsibility for the attack and named the militants involved in it.

According to a statement issued by the Inter-Services Public Relations, four terrorists attempted forced entry into the PC hotel in the afternoon. Security forces cordoned off the area and safely evacuated the people present in the hotel.

“Terrorists [have been] encircled by security forces in staircase leading to top floor [of the hotel],” the ISPR said, adding that a clearance operation was in progress.

Later, DIG of Makran range Muneer Ahmed Zia Rao said the first, second and third floor of the hotel had been cleared and the attackers had taken refuge on the fourth floor where a shootout between them and security forces continued.

Sources said that the gunmen entered the hotel promises at around 5pm. Soon Navy commandos and Army and Frontier Corps troops launched an operation. Navy helicopters landed on the roof of the hotel.

Official sources denied rumours about the presence of Chinese and other foreigners in the hotel.

“There was no foreigner staying in the hotel when it came under attack,” Balochistan Home Minister Ziaullah Langove said. “There are reports of a few people sustaining minor injuries,” he told AFP.

A police official said that there was no guest in the hotel and only local staff was present there, adding that the staff was also evacuated safely by security forces.

Security officials said that the security forces after taking control of the hotel had cleared the first floor of the hotel. “The terrorists have been confined in a portion of the hotel where an exchange of fire continues with brief intervals,” they said.

“We have been hearing heavy firing from the hotel since around 5.30pm onwards. A blast was also heard in Gwadar,” Musa Baloch, a resident of the port city told Dawn.

He said the roads leading to Koh-i-Batil, the hill on which the five-star hotel is located, had been closed by a heavy contingent of security forces. “No one is allowed to travel to Koh-i-Batil.”

Meanwhile, reports suggested that the security forces were still busy in clearing the hotel and the gunmen were still in the hotel when this news report was filed.

Mohammad Aslam, the on-duty officer in Gwadar, said ambulances and rescue officers were waiting at a road leading to the hotel, and that he could hear the rattle of gunfire but that the operation was coming to an end.