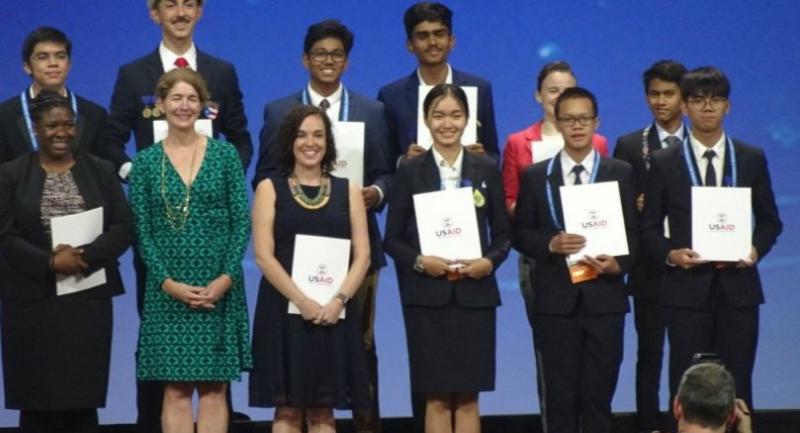 Eight Thai student teams, including the team of former stateless high-school student Nampeung Panya, have landed awards and prizes in the international student science-project competition held during a major fair in the United States.

Following the academic-contest side of the “Intel International Science and Engineering Fair 2019” (Intel ISEF 2019), held last week in Phoenix, Arizona, the Society for Science and the Public and the Intel Foundation jointly announced the Grand Awards for student science projects in 22 fields.

Among the winning student teams from around the world were eight from Thailand, who received awards and cash prizes for their stand-out projects.

One of the Thai prize-winners was 18-year-old Nampeung’s team from Chiang Rai’s Damrongratsongkhroh School, which received a special award and a US$3,000 (Bt95,600) cash prize from USAID for its innovative science project to improve the survival rate of rice seeds during drought by coating the seeds with sap from local plants.

Nampeung had nearly missed out on the opportunity to compete in the student science-project competitions at the fair, as her US visa applications were repeatedly turned down due to her then-stateless status.

She only obtained a visa to enter the US at the 11th hour, after being granted Thai citizenship by the Provincial Administration Department in the final week before the team was due to travel.

Suwarong Wongsiri, deputy director of the National Science Museum, on Monday said that with the support of the Higher Education, Science, Research and Innovation Ministry, 17 Thai student teams had participated in this year’s science-project competition at “Intel ISEF 2019”.

While not every Thai team had won in its category, Suwarong emphasised that all 17 had outstandingly represented Thailand in the international academic competition side of the event, and in doing so had “added fame for the country”.

With all of the Thai teams due to arrive back on Tuesday, the executives of the National Science Museum will therefore be waiting for them at Suvarnabhumi Airport to greet them upon their return to the Kingdom.