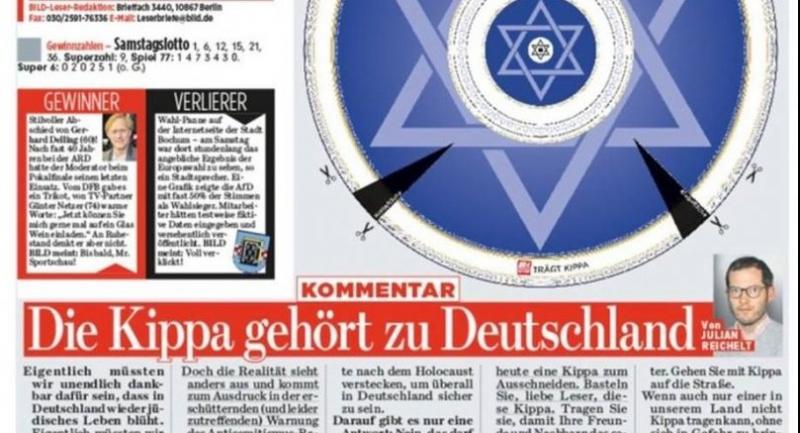 Berlin - German daily Bild published a cut-out-and-use kippa on Monday in a bid to fight rising anti-Semitism, after Jews were warned about the potential dangers of wearing the traditional skullcap in Germany.

Over the weekend, Felix Klein, the German government's commissioner on anti-Semitism, said he "cannot advise Jews to wear the kippa everywhere all the time in Germany", in an interview given to the Funke regional press group.

Israeli President Reuven Rivlin voiced shock at Klein's warning and said it was a "capitulation to anti-Semitism" and evidence that Jews are unsafe in Germany.

Bild, Germany's top-selling daily newspaper, waded into the debate, calling on readers to "stand in solidarity with (their) Jewish neighbours" by making "their own kippa", bearing the star of David, to "raise the flag against anti-Semitism".

Rejecting the warning to leave off the kippa "seven decades after the Holocaust", Bild's chief editor Julian Reichelt wrote: "There is only one answer to that: No, it cannot be the case!

"If that is so, then we have failed in the face of our history," he said.

Urging readers to cut out the skullcap and wear it, Reichelt stressed that "the kippa belongs to Germany."

Germany, like other western countries, has watched with alarm as anti-Semitic and other racist hate speech and violence have increased in recent years while the political climate has coarsened and grown more polarised.

Anti-Semitic crimes rose by 20 percent in Germany last year, according to interior ministry data which blamed nine out of 10 cases on the extreme right.

The arrival in parliament of the far-right AfD, whose leaders openly question Germany's culture of atonement for World War II atrocities, has also contributed to the change in atmosphere.

Chancellor Angela Merkel has also deplored "another form of anti-Semitism" stemming from a major asylum-seeker influx, with many coming from Muslim countries like Syria, Afghanistan or Iraq.

The Central Council of Jews in Germany has already issued several warnings about wearing the kippa in public.

In one prominent case last year, a 19-year-old Syrian man was convicted for assault after lashing out with his belt at an Israeli man wearing a Jewish kippa skullcap while shouting "yahudi", Jew in Arabic.