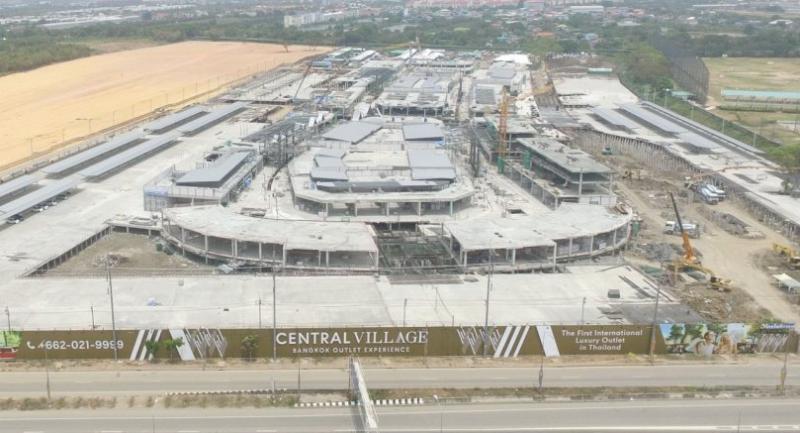 With construction of its luxury Central Village now 70 per cent completed, Central Pattana Plc (CPN) on Wednesday opened the booking for the second phase of retail space after the first phase was completed.

The shopping centre and property developer has held a tenant meeting to prepare for the official grand-opening launch scheduled for August 31.

“We are very proud that we have been able to create Central Village, Thailand’s first international luxury outlet, where Thai people can be proud of Thailand being a global shopping destination,” Wallaya Chirathivat, deputy chief executive officer of CPN, said. This will help fulfil the travel experience in Thailand as comparable to other leading countries around the world.

“Over 65 brands have chosen to open their exclusive outlet stores only at Central Village. We aim to attract over 10 million Thai and foreign shoppers in the first year.”

To prepare for the official grand opening, Central Village will launch a marketing campaign to support “brand lovers” among Thai and foreign tourists, particularly the “Young Affluent” target group, which is a new segment that luxury brands around the world are keeping an eye on.

This target group is likely to increase in Asia, said Wallaya. They are 25-40 years old and have enjoyed success early in their life and career, with a monthly income of over Bt50,000. They have high purchasing power and most are “smart shoppers” who tend to consider value and quality rather than luxury.

They are “quality seekers” and tend to have self-rewarding behaviour as well as being “status hunters”. Shopping outlets are a top choice for this target group. According to data from “The 1”, over 2 million of their members are considered “Young Affluent’”.

“They are a new generation of consumers that we need to focus on,” said Wallaya.

For the concept design, the project has aimed to combine elegance with a unique Thai sensibility in this project. Copper hues will be used to represent “luxury, natural and prestige” along with silver-gray to represent “modernization, sophistication and innovation” for the new generation.

The building was architecturally designed to reflect a modern Thai style using a Thai-style gabled roof with a minimum of complex patterns to give it a more modern look. The zones are divided to reflect the feel of several different villages. The shops within the project will be called “boutique stores” to represent an easily accessed luxury, and are combined with an outdoor green space similar to other popular outlets around the world.