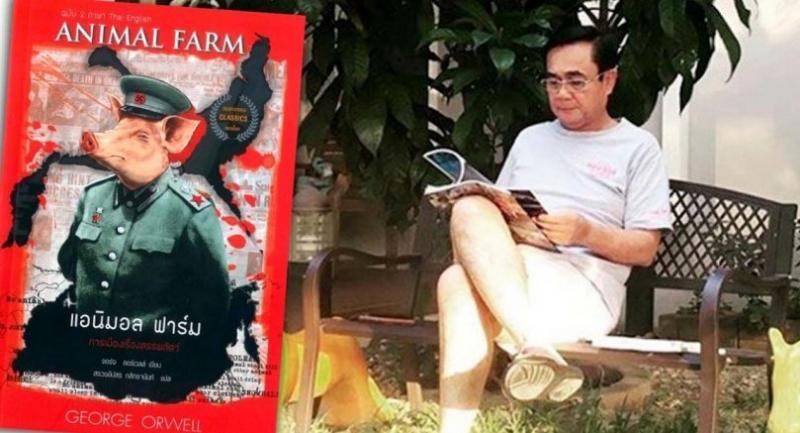 Netizens posted his recommendation with comments such as “the man who has run the country undemocratically for the past five years has picked the wrong book”. Many also asked if Prayut was trying to portray himself as a bookworm, and if he had actually read the novel.

First published in 1945, “Animal Farm” is a satirical novel in which Orwell savages authoritarian rule, referencing the post-revolution Soviet Union. The novel is about farm animals that are treated badly, overworked and underfed by their human owners. The animals are led by a pig to revolt against the farmers, by overthrowing the men and taking over the farm themselves.

Pigs take over the administration of farm and assign different duties to all the animals. Yet their rule proves no better than that of humans.

Netizens, who have perhaps read the novel before Prayut recommended it, compared his coup in 2014 as the animal revolution in the book.

They said his junta rule is no better, maybe even worse, than the regime he toppled in 2014.

Well-known writer and bookworm Sarinee Achavanuntakul posted a famous quote from the novel on Facebook: “All animals are equal, but some animals are more equal than others.

“Perhaps Prayut has not read the book, or never finished it.”

Asked if he has read “Animal Farm” as recommended by Prayut, ex-PM Abhisit Vejjajiva told reporters without elaborating: “I’m worried people don’t get the point.”

In a Facebook comment, journalist Sompop Lee said it was ironic that the junta suppressed the reading of Orwell’s “1984” when it took power. “Now, the junta chief is recommending a novel by the same author. I’m really confused,” he wrote.

Eight protesters were arrested when they were participating in a protest in June 2014 with copies of “1984” outside Siam Paragon to voice objections to the junta’s restrictions on freedom.

Government spokesman Werachon Sukondhapatipak said yesterday that Prayut did not want people to politicise the recommendation. “People should not interpret the recommendation as an insult to their intelligence. A book always offers wisdom,” he said.

Werachon said the message from “Animal Farm”, as suggested by the premier, is that we will never get what we desire and nobody can satisfy everybody.

“It is the natural rule – we have to take care of things surrounding us, including animals on the farm.”