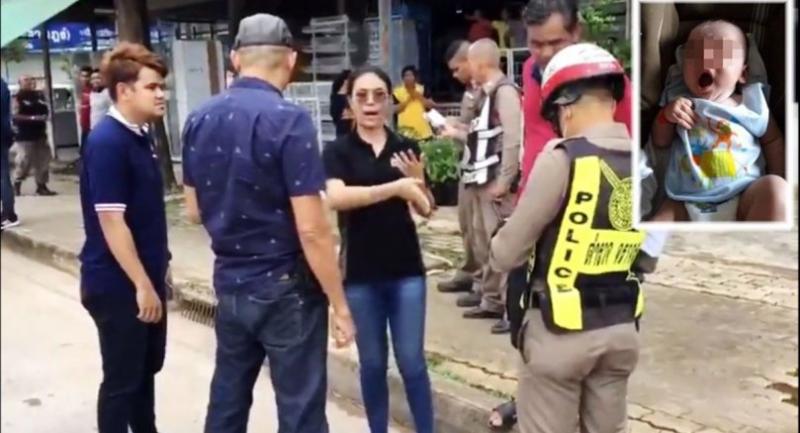 The incident in which a one-month-old baby was snatched from his 30-year-old mother in Surat Thani’s Muang district on Monday, took a new twist police investigation revealed a custody battle between the child’s adoptive mother and his 18-year-old biological mum, police said on Tuesday.

Forty policemen have been dispatched to look for the baby, after Yala-native Sasithorn Chujit filed a complaint that she had been drugged and could not put up a fight when the child was snatched from her while she was in a car at noon on Monday.

However, after six hours of questioning, Sasithorn finally admitted that it was a fabrication and the child had been taken away by his biological mother. She told police that she had had a miscarriage after five to six months of pregnancy, and in order to protect her husband from grief, she pulled strings and secured a newborn from Trang to declare as her child. She also told police that she used a document from a community hospital to apply for the baby’s birth certificate.

Investigators then contacted the baby’s real mother, asking her to bring the baby to the Muang Surat Thani Police Station to prove facts. The 18-year-old mother, Ing-on Klincheun, showed up at the precinct at 9.30pm on Tuesday and presented evidence, including the baby’s birth certificate and a Line message telling Sasithorn that she was taking her baby back.

Police will collect DNA samples from both women, the baby and two other relatives to solve the conflict. While awaiting test results, the baby will be placed under the care of the Surat Thani Children and Family Home.

Police also used this case as an opportunity to urge the public to not panic about people allegedly being rendered helpless by a mere touch or exposure to chemical, as publicised in Thai social media.

Police is now also probing if Sasithorn could be charged with filing a false information to state officials regrading the baby boy’s birth certificate – as the biological mother had already filed for and obtained it first.