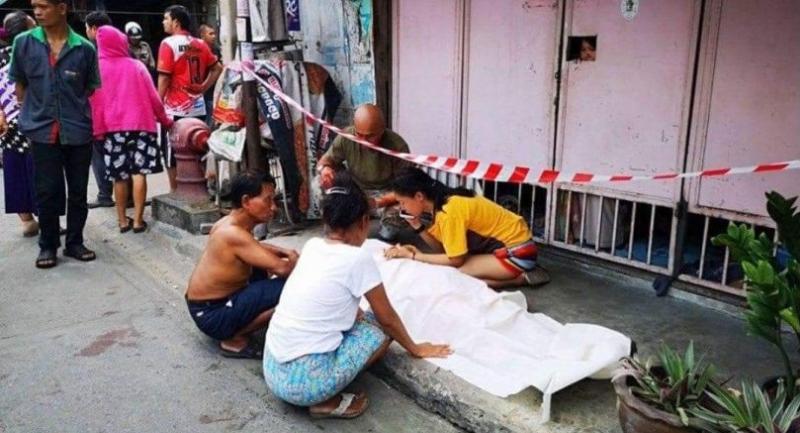 The dead include a passer-by, 20-year-old deliveryman Weerawat Pheungkrut, who was struck in the forehead by a stray bullet. He is survived by his mother and a four-months-pregnant wife.

Weerawat’s mother witnessed his fatal wounding on Soi Udomsuk (Soi Sukhumvit 103) in Bang Na district as her son rushed to remove his own motorcycle from the scene so it wouldn’t be damaged.

Also killed was Watcharin Nga-chalao, one of the taxi-motorcyclists involved in the turf clash between rival taxi queues.

Police said more than 100 members of the “Udomsuk 1” and “Udomsuk Rungruang” taxi stands began brawling shortly after 10am on Saturday.

Far outnumbered, police were unable to stop the fighting.

One of the Udomsuk Rungruang bikers, speaking on condition of anonymity, said it started after he was prevented from delivering a passenger to his destination and forced to take off his taximan’s jacket.

“I went back to my stand to tell my friends what happened and we decided to confront the other guys, but they outnumbered us and we got beaten up,” he said.

Kritton Sriboonmee, also of Udomsuk Rungruang, estimated there were nearly 100 men on the rival side, “armed with batons and wooden bars”, and he was struck on the head.

“I ran for my life,” Kritton said, “and then I heard four or five gunshots.”

He said the two taxi stands have been locking horns since Udomsuk Rungruang was established last year. Its members refused to give up their claim “because neither of us has a proper licence”, Kritton said.

Metropolitan Police Division 5 commander Pol Maj General Mongkhon Warunno said the identities of all the brawlers were known and the main men on both sides would be interrogated.