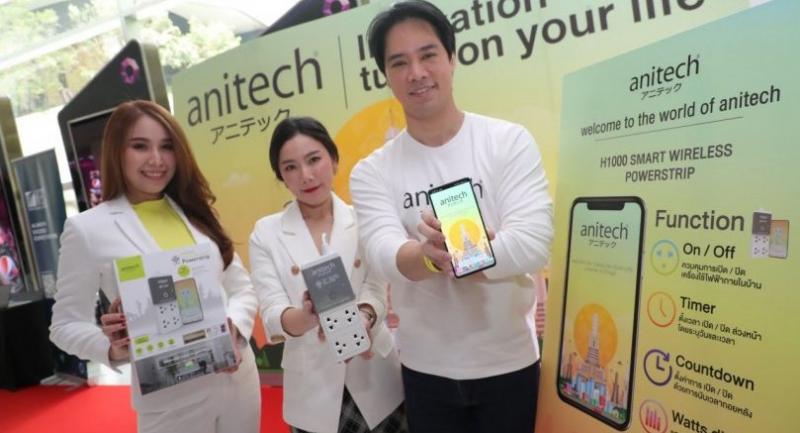 The company said in a press release on Wednesday that the power strip is a hyper-convenient and safe power strip certified by the Thai Industrial Standards Institute (TISI), which can be controlled from anitech IoT Application on IOS and Android smartphones. The produced aims to tap into the B+ segment of consumers and higher while reinforcing its position as leader in the Thai power strip sector.

Pitchyen “Thomas” Hongpakdee, CEO - chief executive officer of Smart ID Group, said the design of anitech IoT power strip is inspired by the first sunlight of the day, which is considered the light of life because it energises all lives it shines upon at daybreak.

With this inspiration, anitech set off to create powerful innovation that would blend cultural uniqueness and modernity and reflect its professionalism and contemporary sentiment under the concept “design innovation that incorporates Thainess for the Thai people”. The resulting anitech IoT power strip helps reinforces its leadership in the innovation that brings happiness to home.

The era of the IoT (Internet of Things) has truly arrived and the internet has transformed the lifestyle of today’s consumers who want to use a single platform to control multiple electronic devices. To cater to this trend, anitech has developed a control system with an application that is simple but offers the highest convenience for smart living in a smart home, said the CEO.

Pitchyen said anitech had experimented with the development of anitech IOT power strip of the H900 Series with an overseas software team but had difficulty in maintaining the continuity of the development. This led to it deciding to form its own product development team who created the anitech IoT power strip of H1000 Series, which has four sockets and a touch screen switch. With an elegant and stylish design, the power strip can blend in with home decoration.

The power strip has four functions: 1. Power switch function, 2. Advance power switch setting that allows the user to select dates and times, 3. Countdown power switch mode, and 4. Power consumption function that shows real-time power usage as well as past records of up to three months. The user can access and control these functions via anitech IoT Application on IOS and Android smartphones anywhere and anytime as long as there is internet access.

Pitchyen said the user interface of the application was designed by a team of Thai developers, the programming and structuring of the application were carried out by Thai programmers, and its cloud server is located in Thailand. This means technical problems will be solved easily and service is readily available to customers. The anitech IoT innovation is truly created by the Thai people for the Thai people.

The anitech IoT power strip is priced at Bt2,590 with one-year guarantee and up to Bt500,000 of compensation for damage. In the future, various features will be added, such as temperature sensor, light sensor and motion sensor, which will provide data to the user and can be used to set the switch. The user will have more freedom in setting the power strip.