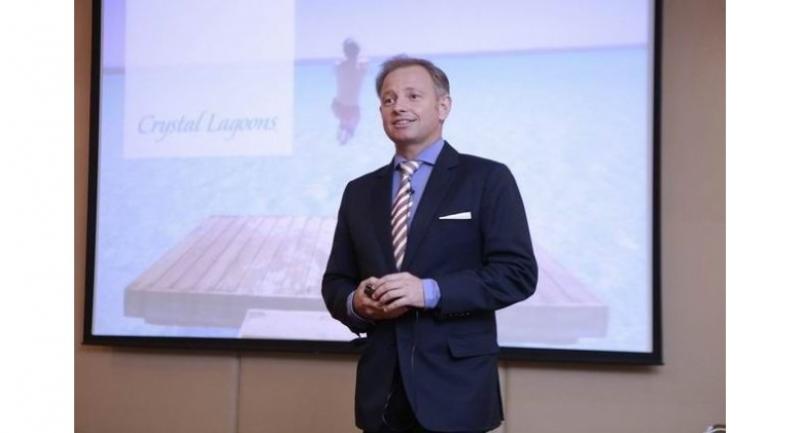 CRYSTAL LAGOONS, a multinational water innovation company and the developer of crystal-clear lagoons technology, aims to secure 60 projects in Asia over the next six years, according to the firm’s regional director for Southeast Asia, Jaime Rivera.

In Thailand alone, the company is expected to sign between two and four deals per year, he said.

The company is globally known for its cutting-edge technology in creating man-made lagoons. It has licensed the use of its technology to residential project partners to build the lagoons which, according to the company, recreate a beach atmosphere and enable people to partake in a wide variety of water sports, such as swimming, kayaking, and paddle boarding.

Crystal Lagoons’ second deal in Asia was it first deal in Thailand and occurred in 2013 with the creation of the 45-rai (7.2 hectares) lagoon inside Pace Development Corporation’s 120-rai MahaSamutr Hua Hin’s ultra-luxury villa and country club resort.

The lagoon has been in operation since 2015 but the residential project is still under construction and is expected to be finished in 2018.

Rivera said there was high demand for crystal lagoons in Asian markets.

“Actually, our target number of 60 crystal lagoons in Asia in the next six years is a conservative number,” he said. He added that the Asian continent had more than three billion people, its economies were growing faster than the rest of the world, and the low, medium and high-income segments were moving up to the next level. All those variables are generating huge real estate opportunities, he added.

He said that the company’s technology added value to global real estate projects similar to the way that beautiful clear lagoons in the MahaSamutr project would add twice the value to its villa compared to regular seafront villas.

He said that the tourism sector continued to be one of the main driving forces in Asia, especially in Thailand, Malaysia and Vietnam, where the governments were launching new policies that were encouraging developers and investors to develop new tourism areas and zones. This would generate healthy competition between all these countries, so the developers must design new hotels or renovate the new ones with new and better recreational amenities.

“In the public arena, people need to have better recreational amenities, such as parks and green areas, especially for the people in the low and medium-income segments. Making crystal-clear lagoons possible in public places provides a beach lifestyle within cities far from the coast. And completely transforming communal spaces can change people’s lives by creating a reality never before imagined,” Rivera said.

“By transforming cities located far away from the sea into successful coastal developments, it also enables a variety of water sports, and creates an idyllic beach life experience just steps away from people’s homes, for everyone to enjoy. This improves everybody’s quality of life, as well as their overall wellbeing, creating an immense social benefit,” he added.

In Asia, Crystal Lagoons is currently working on 20 projects at different development stages, and has two projects already in operation across Asia, including the MahaSamutr lagoon project. The other operational one is Bintan Treasure Bay in Indonesia, which has a 6.3-hectare crystal-clear lagoon surrounded by a white sandy beach.

Crystal Lagoons is also working on several projects and is in discussions with five developers in Thailand, with real estate projects under development and planning in Pattaya, Sattahip, Chon Buri, Chiang Rai and Phuket, he added.

“We also have four projects already in negotiations in Vietnam,” he said.

The 20 projects the company was at the discussion stage with renowned developers across Asia include real estate projects in Kuala Lumpur, Sepang, Malacca and Johor Bahru. In Indonesia, it has two projects under negotiation in Batam and Jakarta. While in South Korea, the discussion is underway for projects in Busan, Songdo, Seoul and Dongsan-Myeon. One of these projects will become a landmark in Asia, the company said.

In Sri Lanka, it is in discussions with one developer for an important project in Colombo. And in Cambodia it is working on a residential project outside Phnom Penh.

“In Thailand alone, we should sign two or four crystal lagoons per year,” he said, adding that the designs of the lagoons are flexible.

“We will be able to design small crystal lagoons for city condominiums [around three rai), and small, medium or large-size lagoons for hotels, residential houses, shopping malls and public projects,” he added.

Crystal Lagoons is associated with major international real estate companies, and has a presence in five continents across 60 countries. The Citystars Sharm El Sheikh in Egypt is Crystal Lagoons’ largest project. It broke the record for the World’s Largest Crystalline Lagoon, covering 12.7 hectares.