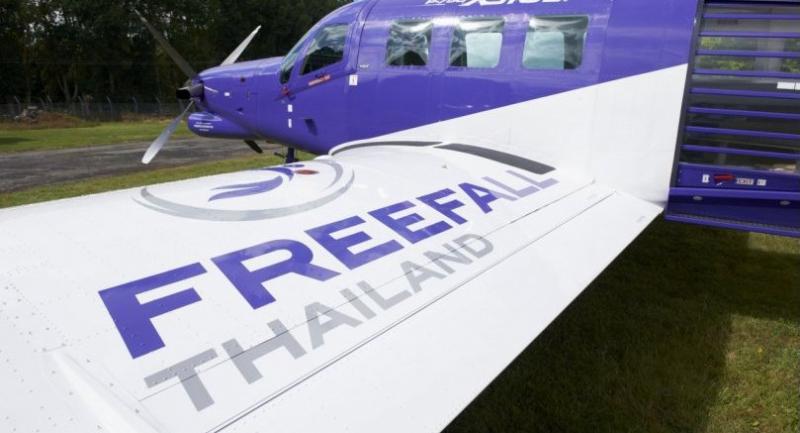 NEW ZEALAND-BASED Pacific Aerospace has entered the Thai aviation market by delivering its first aircraft to Freefall Thailand to cash in on the boom in skydiving tourism.

Mark Crouch, general manager for global markets, said yesterdaythat the sale to the Thai operator, whose pilots and engineers trained on the P-750 in New Zealand and spent a day with veteran company Skydive Taupo, is another measure of Pacific Aerospace’s growing success in the skydive market.

“All of our sales have been going to drop zones for tandem jumps. Most major tourist areas now have drop zones or will have soon,” he said.

The aircraft, painted in Royal Thai Purple, is Pacific Aerospace’s first sale to Thailand, although the P-750 XSTOL is already one of the most popular skydiving aircraft in the world, working in drop zones in the United States, Europe, China, Australia, New Zealand and Asia.

The turbine engine-powered P-750 can carry 17 skydivers and is in demand by the sport’s operators for its ability to climb fast to jump height and land again in quick time to pick up another load of jumpers.

The arrival of this P-750 XSTOL from Hamilton, the company’s manufacturing base, is expected to be creating a stir in the skies above a new parachuting drop zone south of Bangkok as the must-have exit photo opportunity for tourists jumping with an experienced skydiver.

After being inspected by the Thai civil aviation authority upon arrival and registered, the aircraft could be flying the next day and earning money for the operator.

This “glass cockpit” replaces traditional analogue instruments and is part of the continued evolution of the P-750 to stay at the top of the skydiving aircraft market.

Pacific Aerospace has manufactured and sold more than 40 P-750s for skydiving.

The aircraft is recognised as the world’s most versatile utility aircraft because it can beconfigured for multiple tasks including survey, firefighting, medical evacuation, passenger and freight transport, specialist geophysical mapping and photography, agriculture and security surveillance.

Its flexibility makes it particularly suited to the variable and challenging terrain of the Asia-Pacific region.

“We are heavily committed to helping develop the skydiving industry and we anticipate up |to 50 per cent of our aircraft |production this year will be configured for skydiving,” he added.