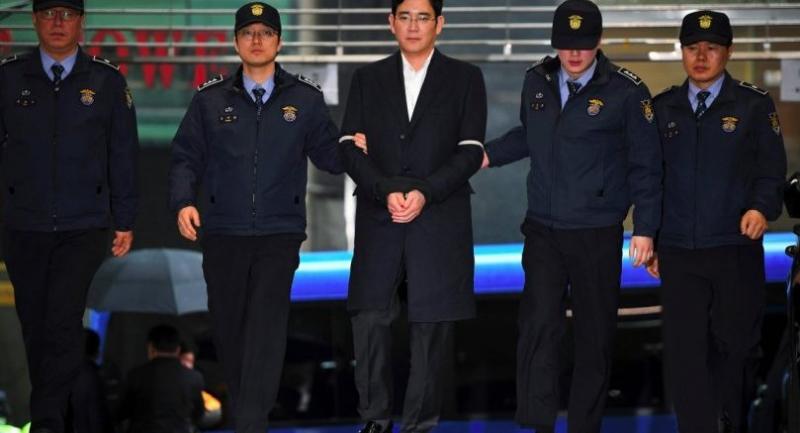 File photo: Lee Jae-Yong (C), vice chairman of Samsung Electronics, arrives for questioning at the office of a special prosecutor investigating a corruption scandal in Seoul on February 22.//AFP

Once seen as a challenger to Apple and Xiaomi, South Korea's largets conglomerate is struggling to move forward following the indictment of Lee Jae-yong and resignation of several top executives.

Lee Jae-yong, who is de facto company chief, is accused of offering 43 billion won ($36.3 million) worth of bribes to Choi Soon-sil, the jailed friend of President Park Geun-hye, in return for the government's backing of a merger of two Samsung affiliates in 2015, according to the Korean Herald.

The merger was a crucial step for the ailing chairman Lee Kun-hee’s power transfer to his only son Jae-yong, the newspaper said.

Once seen as a major contender against smartphone giants Apple and Xiaomi,  Samsung’s reputation took a spectacular tumble in 2016 when its high-end Galaxy Note 7 phones were found to explode randomly – prompting airlines to permanently bar the device.

Its troubles continued as it became tied to a corruption investigation into President Park Geun-hye, who was impeached on December 9 and may be removed from office later this month.

Lee Jae-yong’s arrest on February 17 has left South Korea’s largest conglomerate without a leader. Samsung also shuttered its Corporate Strategy Office on Tuesday, which has headed the company since 1959 and oversaw its 60 affiliates. Three top executives resigned the same day.

While Samsung is best known for its electronics unit and mobile phones, it operates a range of businesses from hotels to shipbuilding.

The Corporate Strategy Office employed 200 executives and employees to oversee company-wide operations. While it was often criticised by affiliates for its top-down decision-making system, it was also recognised for its speedy and efficient operational management, according to the Korean Herald.

2016 proved a difficult year for the Korean giant, once hailed by tech magazines and market executives alike for its innovation and sound expansion strategies. While the company says it will regroup and forge forward in 2017, analyst say they will reserve their judgement on the company until the court cases are resolved and new leadership is revealed.