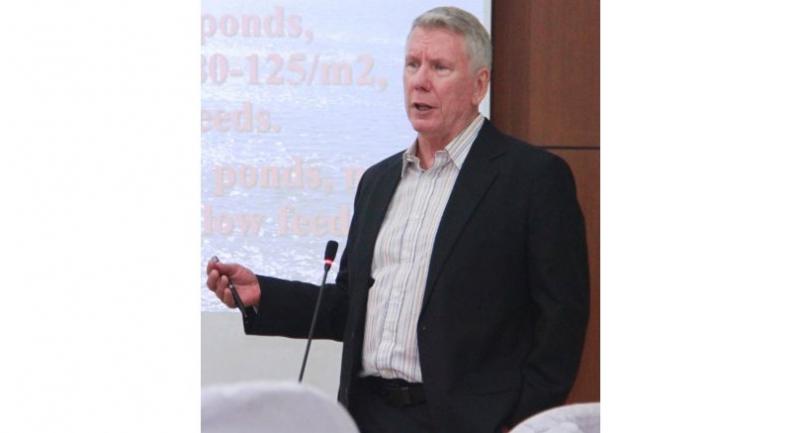 THOUGH MYANMAR’S shrimp export is much less than that of Vietnam and Thailand in terms of tonnage and value, the nation is set to leapfrog its production with American experts’ technical assistance, said Kyaw Tun Myint, president of the Myanmar Shrimp Association.

“We usually import broodstock from Thailand. But, possibility for the broodstock to suffer some diseases is truly a major risk to our shrimp production. Now we are about to start sustainable shrimp farming with the help of a firm from the United States,” he said.

According to Kyaw Tun Myint, Myanmar entrepreneurs in the industry are considering farming white shrimp with the latest technology to be brought by Hawaii-based Marine Genetics LLC. Currently, farming black tiger is the most popular among shrimp hatcheries in the nation. Yet, he believes white shrimp will replace black tiger soon, as it is best suited to a technological approach to shrimp farming.

“We will start farming white shrimp this year. If we are successful, it will not only support our food security but also may reduce the trade deficit up to 25 per cent, thanks to potential surge in shrimp export,” he said.

As part of Marine Genetics’ support to local shrimp businesses, its president Jim Wyban visited Myanmar for the first time last week. With the help of project manager Kelly Morgan, Wyban recently set up a shrimp hatchery firm named Best Burma PL in the nation. During his visit, the expert shared his experience with local businesses.

Wyban said there is vast potential to develop export-oriented shrimp farming in Myanmar. He said the shrimp industry in Myanmar is in a primitive non-technical stage of development similar to Thailand 30 years ago. Yet, he is optimistic the industry in Myanmar can surge ahead with effective use of latecomer advantages.

“I believe there is a very great opportunity here. We can design things based on all our experiences in designing and developing industrial scale shrimp hatcheries in Thailand, Vietnam, China and Indonesia. In the development stage of the industry in Thailand, we made many, many mistakes. But now we have enough experience so we can skip those mistakes,” he said.

Last year, 46 million tonnes of shrimps were produced globally, and was worth US$18 billion. Eighty-nine per cent of the world’s shrimp production came from Asia.

White shrimp dominated with an 86 per cent share of global production.

Worldwide, the US, China and Southeast Asia are leading importers of white shrimps.

There are 120,000 hectares of ponds in Rakhine State that are operated in an extensive style using wild caught PL (postlarvae). This produces very low, unreliable volumes, Wyban said.

He said the 3,000-kilometre coastline in Myanmar is a compliment to the nation’s great potential to develop a vibrant shrimp farming industry. He said a reliable supply of locally-produced high quality SPF (specific pathogen free) PL is essential for the industry to grow. Such a supply will encourage farmers to develop their farms using modern technology that can produce large quantities of healthy shrimp suited to the global market.

Wyban projected that Myanmar could export 100,000 tonnes of shrimp worth $1 billion per annum over the next five years. He said the industry could create thousands of quality jobs for rural people, and high value export commodity could generate large revenues for the nation, as premium quality shrimps may increase market shares in the global market.

According to its market survey, Best Burma PL projects a $50 million market in the future. As the first step, the firm will provide the latest technology to its local partners to farm up to five million white shrimp broodstock in three regions – Yangon, Ayeyarwady and Rakhine. The modern farming is expected to commence later this year.