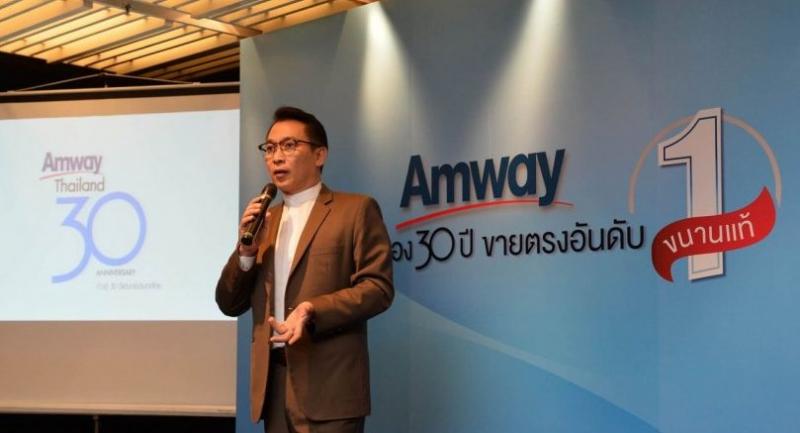 Amway Thailand has announced that it will celebrate its 30th anniversary by spending Bt360 million to reward some of its direct sellers with a luxurious Mediterranean cruise to six beautiful destinations.

As well, the “Amway … Bikes for Kids” campaign will deliver 3,000 bicycles to Thai children in remote areas.

The company reported its highest sales growth of all time in the first quarter of this year, at 10 per cent.

“Amway marks 30 years of business operation in Thailand this year and we are proud to have delivered good things to Thai people all along,” said Kittawat Ritteerawee, managing director of Amway (Thailand). “This success is attributed to the ‘AmwayNext’ strategy and our integrated business plan, which focuses on building direct brand experience through quality products that truly respond to specific needs and lifestyles of the consumers.

“Our Q1 growth was driven by BodyKey by Nutrilite, a personalised weight-management programme, and the launch of re-energising Nutrilite PhytoPowder beverage crystals. In Q1/2017, Amway Thailand recorded our highest sales growth of all time at 10 per cent.”

Amway says it puts a strong emphasis on speedy operation across all business functions and prioritises business planning that enables quick achievements of its direct sellers, whom it calls Amway business owners (ABOs). As a result, 6 per cent of Amway Thailand’s direct sellers are classified as “Platinum ABOs”. It hopes to double that percentage within eight years.

“We have therefore modernised our business model and strategised stronger penetration of this target group to present Amway business as a second career that fits perfectly into their lifestyles,” Kittawat said.

“To mark the 30th anniversary, Amway Thailand will spend more than Bt360 million to bring our ABOs on board a Mediterranean cruise in May this year, giving them a VIP travel experience to discover six beautiful European destinations: Barcelona, Provence, Nice, Florence, Rome and Naples.

“On contribution to Thai society, Amway Thailand is firmly committed to children and youth, and we consistently implement projects for them. To celebrate our 30th anniversary, we’re running a major campaign called ‘Amway … Bike for Kids’ with budget support of Bt10 million to give away 3,000 bicycles.

“The campaign will help improve lives of Thai children in remote areas nationwide by giving them the means of transport to and from school. Donations from interested public are also accepted until May 31 before the campaign sets about its field trips to deliver the bicycles in June.”