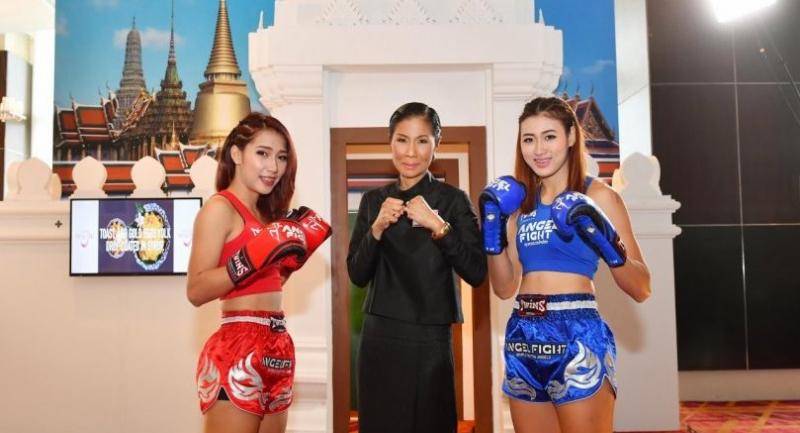 Kobkarn, centre. shows her form with boxers at the WTTC summit.

By MANOTE TRIPATHI
SPECIAL TO THE NATION

Constraints such as out-of-sync regulations, insufficient infrastructure and inconvenience continue to hamper freedom of travel in Asean, the World Travel and Tourism Council summit heard.

“Asean is 50 years old, but Asean tourism acts like a 15-year-old,” she said in opening the session on “Freedom to Travel: Can Asean countries lead the way?”, which moderated by noted broadcaster Linda Yueh on the second day of the two-day summit that wrapped up yesterday.

Kobkarn said Asean has dual tourism and travel strategies – long-haul and intra-Asean – that benefit not just Thailand, but Asean as well.

The “long-haul” strategy offers “two-countries-one-destination” travel packages that encourage travellers from Europe, the Middle East and America to visit at least two Asean countries as part of the “intra-Asean” promotion of weekend destinations, medical tourism, wellness and education.

“Thailand reported 32.5 million tourist arrivals (last year). People come to Thailand to eat, shop and visit doctors. Up to 70 per cent of them were from Asean, in which tourism growth averages 6.5 per cent,” she said.

“We have to thank all the airlines, the low-cost ones in particular. The growth of Asean tourism is due to the growth of budget airlines offering capital-to-capital routes.”

Further expansion of Asean tourism can be achieved through maximising the potential of the existing air, land and maritime links between mainland Southeast Asia and the rest of the region, she said.

Thailand’s developing north-south and east-west corridors, the planned aviation hub in Rayong’s U-Tapao, its developing Phuket-based maritime tourism and over 600 flights from Thailand to other Asean countries are some of the Kingdom’s strengths that will not only stimulate Asean tourism but also improve regional connectivity.

“On land, we are seeing caravans of motorcycles, you know, big bikes like Harley-Davidson, going across the borders frequently,” the minister said.

“Maritime tourism is growing fast with an Asean Caribbean model that allows for luxury travel on super yachts and yachts visiting places like Myeik, Phuket, Penang, Phu Quoc and Sihanoukville.

“There will be cruises along the Mekong River – a magic river for many of us that is going to be big in the future. We need to use the river efficiently.

“When it comes to safety and ease of travelling, which is something new in Thailand, it’s still not perfect yet. We need public-private partnerships.”

Kobkarn’s planning to take her holiday in Myeik.

The benefits of tourism growth should be collectively shared and distributed sustainably throughout Asean, Kobkarn said, extolling the merits of the sufficiency economy concept of the late King Bhumibol Adulyadej.

“Asean will grow together. No one (in Asean) is a bigger or smaller brother. We are working together,” she said. “Tourism is not about making money, not just about economics. We have to make sure that everyone gets something and we leave something for our children and the younger generation.

“We need to give the right to everyone in the 10 Asean countries to travel. Freedom of travel is not for the select few, but for everyone.”

Arun Mishra, director of ICAO for Asia-Pacific, told the session that poor infrastructure, along with discordant regulations, is the main stumbling block to growth in Asean, citing congestion in the Asean skies and at airport terminals.

“With airports in the region enjoying a boom comes congestion. Everywhere new terminals are being built,” Mishra said.

“Worse, mobility of qualified aviation professionals is restricted by regulations that hinder the free flow of labour to where it’s needed. Harmonisation of regulations would help.” Arief Yahya, Indonesia’s Tourism Minister, said infrastructure is a major concern in countries like his where the lack of funding is a perennial problem.