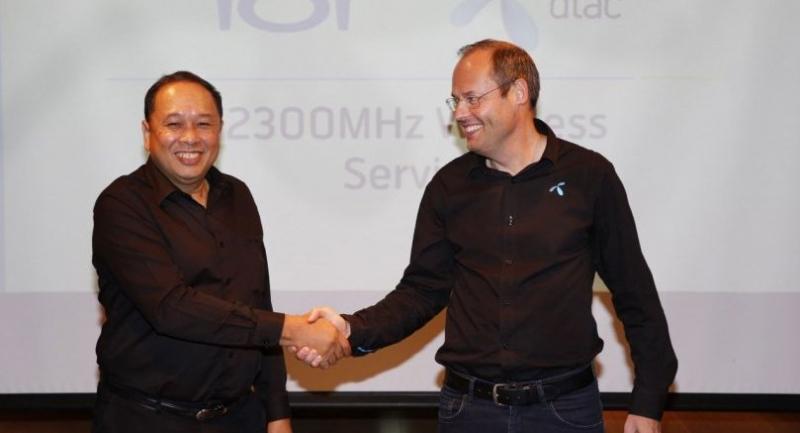 TOT’s selection of Total Access Communication to co-develop a fourth-generation mobile telecom service on the state agency’s 2.3-gigahertz spectrum band is positive for DTAC’s long-term prospects but also subjects it to short-term financial pressure, according to analysts.

A telecom analyst said the contract, to be drafted and will last until 2025, would help ease DTAC’s spectrum constraints. However, the cost of its obligations to TOT under the contract will pressure DTAC’s earnings in the initial stages, as it will take time to reap the potential benefits.

On Wednesday, TOT announced that its board had approved beginning the contracting process with DTAC for co-development of the 4G-2.3GHz service. DTAC will build the 2.3GHz mobile network for TOT and purchase 60 per cent of the network’s capacity through an annual fixed payment of Bt4.51 billion.

The deal is expected to be signed in the fourth quarter this year.

The analyst added that the contract would help DTAC improve network quality and defend its market share. However, it could take a year or more before it can realise any revenue from the deal, as only 20 per cent of handsets in Thailand are 2.3GHz-compatible.

According to Fitch Ratings, if TOT and DTAC finalise the agreement, DTAC’s market position will be strengthened, as its relatively weak spectrum portfolio has constrained its business up to now.

However, additional expenses under the contract, the potentially high cost of acquiring a licence to the 1,800-megahertz spectrum at an auction planned for next year, and the likely elevation of network capital expenditure could put more pressure on DTAC’s earnings, cash flow and financial leverage in the medium term.

Fitch expects DTAC’s EBITDA (earnings before interest, taxes, depreciation and amortisation) to decline by around 5 per cent to between Bt24 billion and Bt25 billion this year from Bt26 billion in 2016, partly because of its payments to TOT under the 2.3GHz contract.

TOT president Montchai Noosong said yesterday that he was confident that the deal would be signed in the fourth quarter.

He added that TOT’s board chose DTAC TriNet as its preferred counterpart in the deal because of the company’s proposal to install around 20,000 telecom towers nationwide for TOT and its offer to purchase 60 per cent of this network capacity through an annual fixed payment of Bt4.51 billion.

Expanding to 80% of population

However, both DTAC and TOT declined to elaborate on the cost of the network roll-out. They plan to expand this network to cover 80 per cent of the population.

Montchai said the development of this partnership was strictly in compliance with relevant rules and law, including the regulations of the National Broadcasting and Telecommunication Commission. The two parties are preparing to draft the contract, which will be forwarded for the consideration of the TOT board and then to the relevant state agencies.

He said the partnership would improve DTAC customers’ experience through greater speeds and even smoother services.

The new 4G service will take up 60 per cent of the capacity TOT currently holds on 2.3GHz. Montchai said TOT would deploy 20 per cent of its 2.3GHz capacity to provide its own mobile service and 20 per cent to provide fixed wireless broadband connectivity in remote areas.

DTAC chief technology officer Prathet Tankuranun said 70 per cent of the 4G devices in the company’s network supported the 2.3GHz-TDD band. DTAC had around 24.3 million customers as of first quarter this year, of whom around 5.9 million were 4G subscribers, using either the 1,800MHz or 2.1GHz band.

DTAC, through its two subsidiaries DTAC TriNet Company and TeleAssets Co, is among several major telecom operators that proposed becoming TOT’s partner for 2.3GHz services. Unlike its two rivals Advanced Info Service and True Corp, DTAC failed to clinch a new spectrum licence at auctions by the NBTC of bandwidth on 1,800 and 900 megahertz.

DTAC currently holds a licence to the 2.1GHz spectrum granted by the NBTC and also concessions to 1,800MHz and 850MHz granted by CAT Telecom. The concessions will expire in September next year.