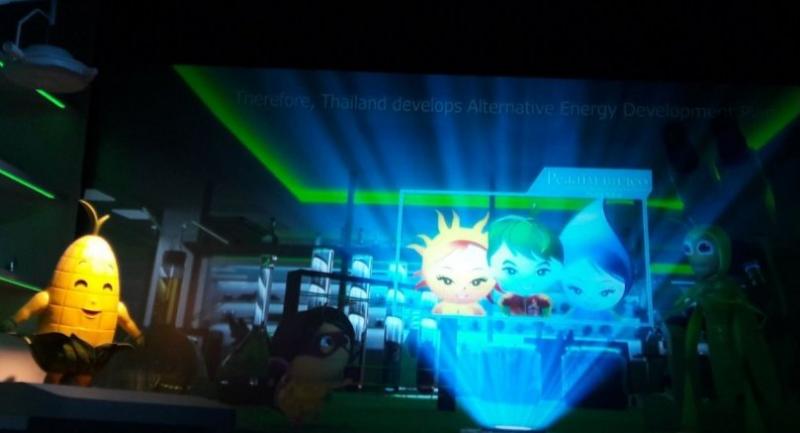 THE LATE King Bhumibol Adulyadej, known as the father of Thai energy, has been given a prominent place at the three-month-long Expo 2017 Astana in Kazakhstan.

The international exposition kicked off on June 10, with an exhibition on the king’s sufficiency economy and energy initiatives held at the Thailand Pavilion.

During the first four days, the pavilion attracted more than 13,000 visitors.

The Thai monarch was the inspiration behind bio-energy development in Thailand. His extensive research on possible energy crops such as locally grown palms have finally paved the way for introduction of biodiesel, which has become quite widespread in Thailand today.

As the Astana-based expo highlights the theme “Future Energy”, its Thailand Pavilion promotes the “Bioenergy for All” concept.

A four-dimension movie theatre |at the Thailand Pavilion shows the farming of future energy, which is developed from natural resources in Thailand inspired by the vision of the Thai monarch.

Spanning nearly 1,000 square metres, the Thailand Pavilion includes the so-called Energy Creation Lab. Visitors can check out biomass and biofuel, such as sugarcane, eucalyptus, rubber, king grass, rice, corn, animal dung and agricultural wastes, cassava and palm – all of which can be turned into green energy.

The use of such energy crops promises a higher income for farmers and better environment.

Kazakh visitors have showed huge interest in boards featuring Thailand’s tourist sites. They are also keen to have their pictures taken with elephant statues, which are included because elephant dung can be used to generate green energy.

General Surasak Srisak, Thailand’s Vice Minister for Energy, presided over the opening ceremony of the Thai Pavilion and expressed confidence that it would attract huge crowds.

The Thailand Pavilion’s Mascot for “Astana 2017” is “Pa-Lang” (which means “power” or “strength in Thai). This lively mascot promises to guide visitors around the Thai exhibition space.

Pa-Lang is shaped like a cob of corn. Recognising that corn is a staple food for Kazakhs, Thai officials decided to use corn as its mascot to make it easier to communicate with local people.

Pa-Lang’s, head however, is in a shape of a sprouting leaf, which reflects that energy from the planet is always renewable.

Visitors will learn in a fun way |how Thailand is a rich bio-economy, thanks to its abundance of agricultural produce and a strong industrial |agriculture sector.

Expo 2017 Astana addresses the possibilities of “Future Energy” in an effort to promote the most appropriate and viable sustainability-driven action plans.

The topic is crucial to human kind’s future as conventional energy sources are dwindling, triggering uncertainty and alarm about what will power machines, cooling homes, and more.