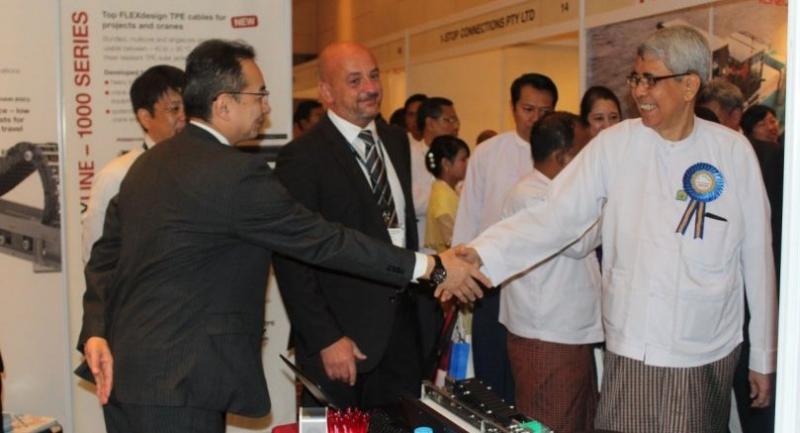 An exhibitor, left, shakes hands with Kyaw Myo, deputy minister for transport and communications, at the 15th Asean Ports and Shipping Conference 2017 held in Yangon on July 67.

Development of shipping industry, ports to be in focus to integrate with global economy

As Asean countries prioritise on improving connectivity within and beyond the region, Myanmar has planned to take advantage of its strategic location between the two mostpopulated nations – China and India – to become a hub of maritime trade in Asia, transport authorities say.

Kyaw Myo, deputy minister for transport and communications, said at the 15th Asean Ports and Shipping Conference 2017 that the development of ports and shipping industry would be a driving force for Myanmar’s integration into the global economy.

“Our government recognises that transport is one of the key sectors for our national economic development and that sustainable growth of our country depends on establishing an efficient and integrated transport system in which ports development is a crucial element,” he said.

He said the regulator intensified its efforts to promote close relationships with regional and international ports and portrelated associations to explore avenues for more beneficial mutual cooperation. He called for emphasis on the multidimensional nature of maritime aspects such as protection of the environment, security, navigation, and other security related challenges.

“As a member State, we participate in Asean initiatives for the acceleration of economic growth, social progress and cultural development in the region through joint endeavours to strengthen the foundation for a prosperous and peaceful community by improving all aspects of transportation,” he said, stressing the importance of ports development.

Myanmar now has nine ports catering mainly to seaborne and coastal trade. Yangon port is the main gateway to seaborne trade, handling about 95 per cent of maritime export and import cargoes. It can be divided into two main areas – Yangon inner harbour terminals and outer Thilawa port, which is located 16 kilometres from Yangon’s business district.

“Regional connectivity is key to our growth, as multinational companies seek new markets throughout the region. We believe we will become a new hub of Southeast Asia thanks to our strategic location connecting regional economic corridors,” he said.

“As the maritime cargo traffic of Yangon Port has significantly increased over the past few years, more terminals and facilities have been developed in Yangon and Thilawa areas.”

According to the official, the regulator has been creating a good environment for investors in the port sector and monitoring and facilitating terminal players of all ports in Myanmar. Private investment has been allowed in Myanmar’s port industry since 1998.

For the development of ports, 37 waterfront land plots (a total of 15 hectares) were allocated in the form of a BOT (build, operate and transfer) system and joint ventures. In Thilawa, 10 plots were developed and an additional 20 plots are under construction.

He said Myanmar would encourage both private sector participation and cooperation with international finance institutions. He said financial assistance from foreign countries and nationallevel development projects like the Dawei special economic zone would drive Myanmar’s port development to a large extent.