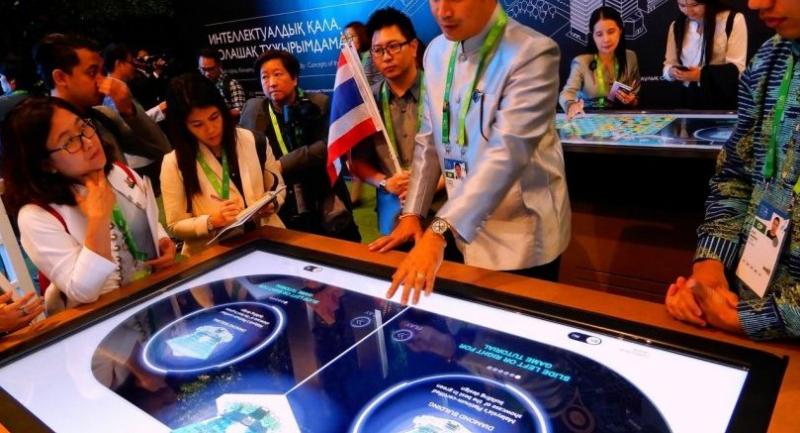 THAILAND reaffirmed its commitment to the principles of the Paris accord to fight climate change and promote renewable energy at the Astana Expo fair in Kazakhstan this month.

Energy Minister Gen Anantaporn Kanjanarat said the kingdom will pursue goals such as the development of biofuels, which are derived from recycled farm waste, as part of its alternative power plan to replace a third of the country’s energy needs in 10 years.

He also paid tribute to the late King Bhumibol Adulyadej, who pioneered many renewable projects such as biofuel and hydropower. The king established biofuels as a practical source of power that benefits farmers as well as industries and urban centres.

Thai biofuel technology over the past 15 years has seen much success, accomplishing the dual objectives of cleaning up agricultural waste by safely treating discharged matter and in doing so, generating electricity,” said Dr Twarath Sutabutr, director general of Epco, the ministry’s policy and planning unit.

In some cases, such as a public-private sector project in Phatalung, a township obtains free cooking gas, with just a Bt30 a monthly fee to service the pipes, he noted.

Thailand was also the first Asean country to build mega-scale solar farms with sites in Lop Buri and Ayutahaya, eight years ago.

The financing structure created by the Thai solar projects remain the critical framework on which the Asian Development Bank and many regional lenders use to provide funding for renewabkle projects.

At the expo, other Asean states - like Malaysia, Singapore and Vietnam - also displayed a wide range of clean energy projects such as smart city infrastructure that conserves power and water, to solar roofing that taps the sun’s rays for electricity.

Malaysia highlighted the importance of protecting its remaining belt of equatorial forest in the North Borneo states of Sarawak and Sabah. It showcased the forest as its equivalent to the Amazon rainforest, a crucial producer of oxygen that sustains life.

For Twarath, the expo was a timely opportunity to honour King Bhumibol’s “sufficiency” legacy that called for locally produced power to replace imported oil, which amounts to 900,000 barrels a day and drains the country’s coffers.

“It was only with the late king’s policies that Thailand became a leader in alternative energy,” he said. “We were far ahead of Japan, China and even the US, in having a clear green energy policy and actual targets to meet.”

But in recent years, both the Yingluck and current administrations have slowed the push for renewables “to protect” local coal and petroleum interests, ministry sources said.

But public support for carbon fuels is ebbing after decades of abuse such as the Mae Moh lignite pollution scandal that displaced large numbers of people in the mid-1980s. It was only lately that officials admitted it had caused environmental damage and affected human health.

Even today, coal-fired plants have met stiff resistance from the public despite lobbying by respective interest groups. At Astana, the Thai Pavilion showcasing progress in biofuel development has been one of the big success stories, said Uthai Mungseemuengdee, managing director of the organising company.

“The expo shows a Central Asian giant like Kazakhstan, which is rich in oil and gas, agrees that renewable sources are the answer for future energy needs,” he added.

“Kazakhs are switching to new power such as hydro, wind and solar to power for the coming decades.”

Along with the expo’s Giant Sphere, a US$3 billion (Bt100 billion) project, Thailand is one of the “top attractions’ at the fair.

Singapore, the more advanced and affluent nation in the Asean bloc, emphasized its smart town concept. By the next decade, it wants all residential and commercial buildings to be “certified green”.

Vietnam, which recently abandoned its nuclear power project, showcased a rich tradition of using wind and water sources for power.

Japan and South Korea spared no expense to demonstrate their leadership in green energy. South Korea produced an animation film that is mixed with a live dance performance.

The Korean film’s hero is a pilot who is stranded on an island where he is helped by a mysterious girl who introduces him to alternative energy.

Japan’s visual spectacle hails a smartphone that can do everything in the future where green energy reigns supreme.Russia boasts its nuclear advancement with a initiative for the North Pole where nuclear-powered ice breakers can reach further into the frontier.