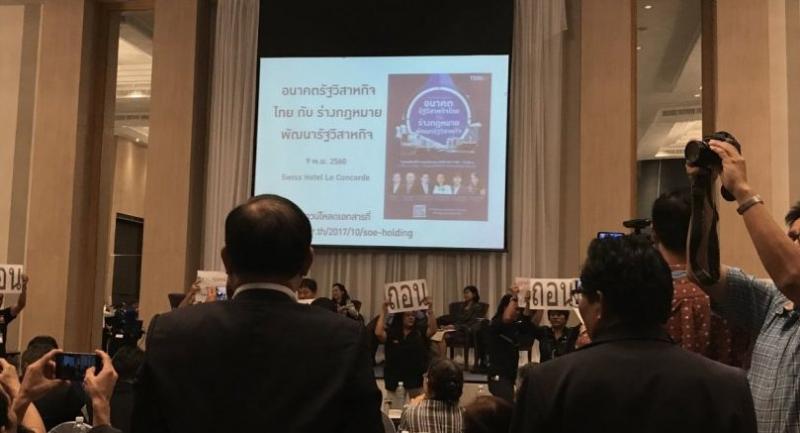 ACADEMICS have expressed concerns over the state enterprises bill which is currently being vetted by the National Legislative Assembly, even as trade unions demand withdrawal of the bill fearing its passage would lead to privatisation.

Nualnoi Treerat, director of the Institute of Asian Studies, yesterday said that those who had drafted the law may have good intentions to improve the efficiency of the 56 state enterprises but the drafting process did not include public participation.

She made her comments at the seminar hosted by the Thailand Development Research Institute.

The bill, if approved by the NLA, will lead to the creation of a holding company similar to Singapore’s Temasek Holdings.

Nualnoi said the bill gives too much power to the board of the holding company, as they could borrow money, which could automatically turn into public debt.

She was also worried about the selection of the board of directors, which may not prevent political intervention.

The bill gives too much power to the State Enterprise Policy Office. “It is like a blank cheque,” she said.

Deunden Nikomborirak, an economist at the TDRI, shared Nualnoi’s view saying there is no guarantee to have qualified board members for the super holding company and state enterprises.

She suggested that a third party should be allowed to recruit board members in order to ensure transparency in the appointments. She also said that the qualifications for the board members should be stated in the law.

She said the bill does not incorporate strong checks and balances to prevent or curb corruption. She suggested that a third party should be assigned to scrutinise the performance of state enterprises.

Former finance minister Sommai Phasee also expressed his concern about the bill, saying it gives too much authority to the prime minister and senior officials who sit at the State Enterprise Policy.

Meanwhile, representatives of trade unions demanded that the bill must be withdrawn from the NLA debate. They said the bill would pave the way for privatisation.

It will also lead to more information disclosure that will allow the public to scrutinise the state enterprises, he added.