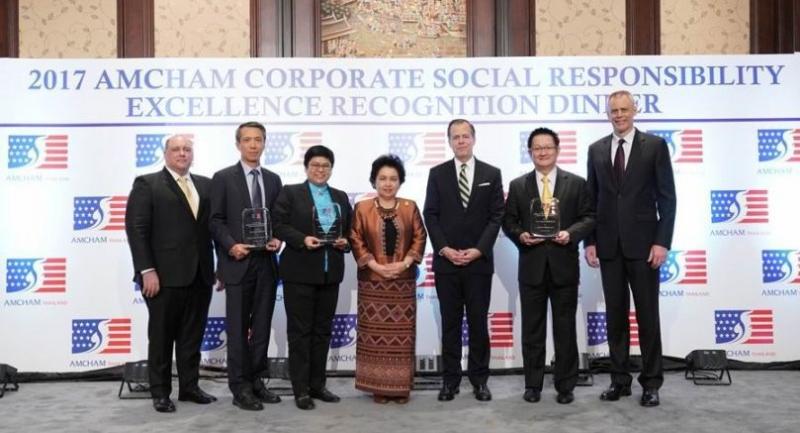 US Ambassador to Thailand GlynDavies and Minister Atchaka Sibunruang of the Ministry of Science and Technology presided over the 11th annual awards celebration on Tuesday (November 21), recognising companies with a demonstrated commitment to conducting business responsibly and giving back to society.
The ACE Awards salute Amcham member companies for their long-term efforts to support Thailand’s sustainable development. Qualifying companies have CSR programmes with measurable results that create both economic and social gains for a year or more, high levels of employee involvement, and strong strategic partnerships with Thai organisations. The company mission must also align closely with the goals of the CSR activities.
More than 70 companies applied for the awards, 59 companies met the rigorous qualification standards for recognition of their CSR activities, and a panel of impartial judges selected three as best in class:
- Western Digital won the Excellence in Partnership Award, presented by Davies and recognising a CSR project that promotes US –Thai partnerships that bring US knowledge, expertise, or best practices to Thailand.
-Dow Chemical won the Excellence in Promoting Thailand 4.0 Award, presented by Atchaka and recognising excellence in CSR programming that supports the Thai government’s efforts under the Thailand 4.0 strategy.
-IBM won the Excellence in CSR Projects Award, presented by Amcham and recognising general excellence in CSR projects.
Ambassador Davies applauded Western Digital for their win, along with all companies with admirable business practices. “I am proud to present the Amcham Excellence in Partnership award for the first time. This award highlights the exemplary efforts of American companies who work alongside Thais to bring about innovative, creative change through their CSR activities. US firms set the gold standard for innovating with a positive social purpose,” he said. “They pioneer new technologies and business practices that help transform Thailand’s economy towards achieving the goals of Thailand 4.0, but also go beyond that to empower communities to help themselves.”
Amcham Board President Jeffrey Nygaard, who opened the ceremony, highlighted the need for companies to focus on creating meaningful long-term impacts. “The companies assembled here tonight represent the best holistic CSR strategies - strategies that demonstrate an understanding of the linkages between business operations and society, and the key role they should play in creating a world that is prosperous, sustainable, and just for everybody.”
Now in its 11th year, the ACE Awards have become a signature Amcham programme that has been replicated in several other countries in Asia including Malaysia, Singapore, and Vietnam.
Special designations were also given to firms that have received ACE awards for five or more consecutive years (Gold), and three to four consecutive years (Silver).