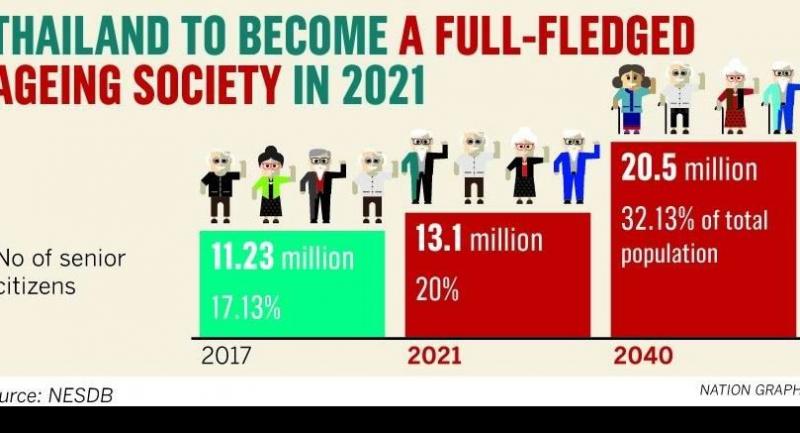 FAMILIES and communities will have seriously limited resources to look after ageing parents and other relatives as Thailand becomes a full-fledged ageing society over the next four years, a state think-tank agency has warned.

Thailand has been moving closer towards an ageing society since 2005, as the number of citizens aged 60 or older has steadily risen, said the National Economic and Social Development Board (NESDB). The number of aged people has risen to 11.23 million, or 17.13 per cent of the total population, this year.

“Thailand will become a full-fledged ageing society in 2021, when their number will rise to 13.1 million or 20 per cent of the total population,” according to an NESDB report.

This presents a challenge for families, communities and the country as a whole, as older people require more care for their welfare and assistance in their daily lives.

According to health reports, the number of seniors needing assistance for their daily activities, such as moving around the house, eating and bathing, rose to 20.7 per cent in 2014 from 15.5 per cent in 2009. Meanwhile, 1.3 per cent of them cannot help themselves at all.

Family is the first supporting unit for aged people, as children generally place high value on, and exhibit gratitude towards, their parents. However, the shrinking size of families has placed strain on this network. Single-child families accounted for 18.3 per cent of Thai families in 2015. The percentage of old people living alone rose to 8.7 per cent in 2014 from 3.6 per cent in 1994, while those living only with a spouse stood at 19 per cent in 2017, according to the National Statistical Office.

The government has supported communities to look after ageing members. In rural areas, members of tight-knit communities often co-operate, but they face a shortage of manpower especially among those who are able to take care of bed-bound patients, said the NESDB.

In urban areas, there are sufficient physicians but not enough volunteers to visit patients or elderly people at their homes. There is also a limit to secondary care services. In Bangkok, community leaders have organised health services for community members, but senior citizens have low trust in community health services. And ageing people have limited financial resources to access health services.

Many families have turned to private health services and these are on the rise. However, there is a lack of quality control in these services, even though the Public Health Ministry has issued guidelines for senior care.

Senior citizens are covered by the universal health care scheme, but they generally only get acute care services. Many do not get access to rehabilitation services after they leave hospital.

The NESDB has suggested that the government increase the capacity of families and communities to look after ageing members. Quality of private health services must be monitored and controlled, it said.

The government may have to provide medium-term services through secondary-care hospitals as a base in order to delay the age at which people enter into dependency.

The government has also been urged to consider raisings fund by issuing “social impact bonds” to support healthcare services for the ageing population in the long run.