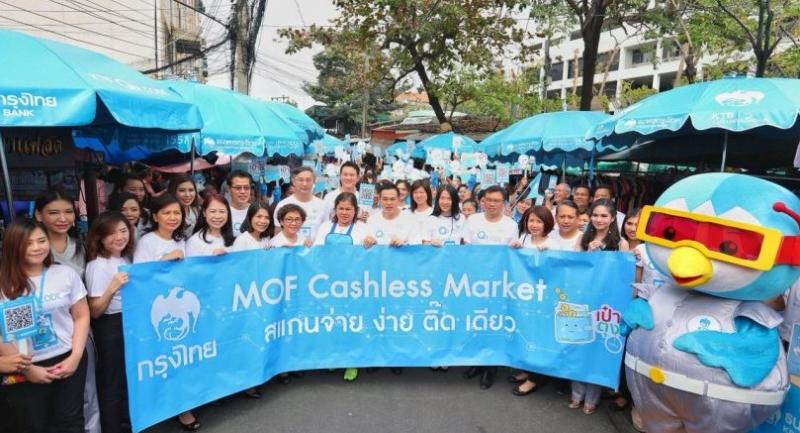 Krungthai’s management team promotes a cashless a market on show at the Finance Ministry yesterday.

KRUNGTHAI BANK forecasts that transaction payment by QR code will grow up to 50 per cent in 2018 from this year when customers become more familiar with the payment method, the bank’s executive said yesterday.

The bank’s senior executive vice president-head of retail banking sales and distribution group, Luechai Chaiparinya, said the bank plans to develop an application called Pao Tang, (meaning wallet) for its customers to use under the concept, Tap and Go.

The application will use a customer’s fingerprint for confirmation when making payments through the application. The bank plans to launch the app in February.

Meanwhile, the bank also plans to launch more promotional campaign to encourage customers to payments through the QR code system when buying products. This will boost the demand for use of the bank’s QR code to rise by up to 50 per cent in 2018 compared with 2017, he said.

He added that others commercial banks in the market also have developed QR code applications aimed at boosting the number of users of this payment method. QR code system payments began in Thailand this year.

This is the reason that the overall market for use of QR code for payment will increase in 2018 compared with this year, he said.

Finance Ministry permanent secretary Somchai Sujjapongse said, after the opening of a cashless payments facility at a flea market model at the ministry yesterday, that cashless payment is one of the ways that will drive the country towards its national e-payment goals.

This is also a part of the plans for the country to transition to a digital economy over the long term.