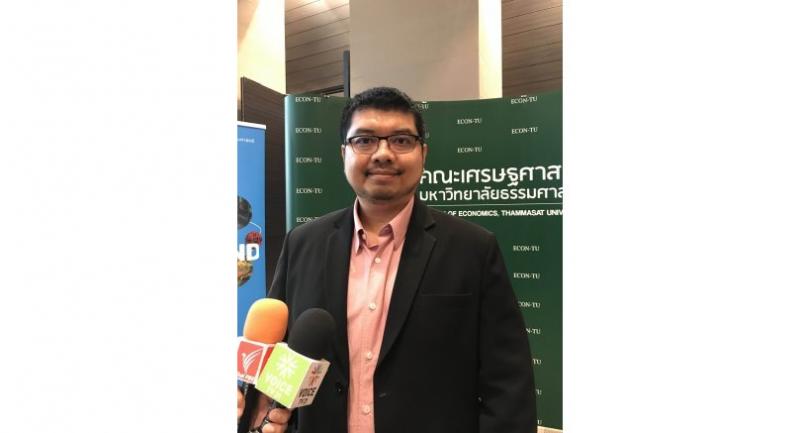 THAILAND NEEDS to turn 13 million people into skilled workers in order to upgrade the economy and escape the middle-income trap, said local and international economists.

Labour force upgrading is seen as one of the key challenges for Thailand as the country moves towards Economy 4.0, Kiatanantha Lounkaew, economic lecturer said yesterday at a seminar entitled “Re-Design Thailand” hosted by Thammasat University ‘s Faculty of Economics.

The proportion of skilled workers in Thailand is only 14.4 per cent of the country’s total labour force, according to Human Report 2016.

This is considerably lower than in countries that are well on the way to Economy 4.0, such as Singapore, Sweden, Finland and Germany whose shares of skilled labour are around 45 per cent to 50 per cent, said Kiatanantha.

The figure from the report suggested that Thailand needs to turn 12.81 million into skilled workers.

The government has been promoting vocational education aiming at producing more skilled workers.

“But it is not only quantity that counts, it is also quality,” he said. Some vocational colleges have worked closely with private companies in order to train their students at factories. But we need to scale it up to nationwide level, he suggested.

As the government promotes 10-targeted industries which require highly skilled workers, the fast-changing world of business has led to a wide gap of skilled labourers.

A recent survey found that there are significant skills gap in industries which have been designated as champion for Thailand 4.0 , such as ICT, food processing, automobile , logistics, health and wellness , he said.

“The challenge is how to close the skills gap as soon as possible , and many countries have succeeded in doing that ” he said.

In addition, substantial skills gap is found in the area of creativity, responsibility,work discipline and ability to put knowledge into practice, he said. He said the import of specialists from abroad may address the problem to a certain degree but the government must make sure that these foreigners would also train Thai workers.

He referred to the government new smart visa programme which will allow specialists stay in the country for four years.

Asked whether he agreed with a plan to raise daily minimum wage nationwide , Kiatanantha said that raising of minimum wage would help consumption and support labourers to cope with the rising cost of livings.

Speaking at the same forum, Jong-Wha Lee, director of Asiatic Research Institute at Korea University, said good human capital is essential for a developing economy to become a high-income country. Other factors include strengthening the rule of law, maintaining a high level of investment and a high growth path.

Thailand economic growth suffered sharply after the 1997 Asian financial crisis before rebounded, but in recently year growth have been slower at around 2-3 per cent.

It is projected that the Thai economy needs to grow an average of 5 per cent annually in order to achieve high income status in the next 20 years.