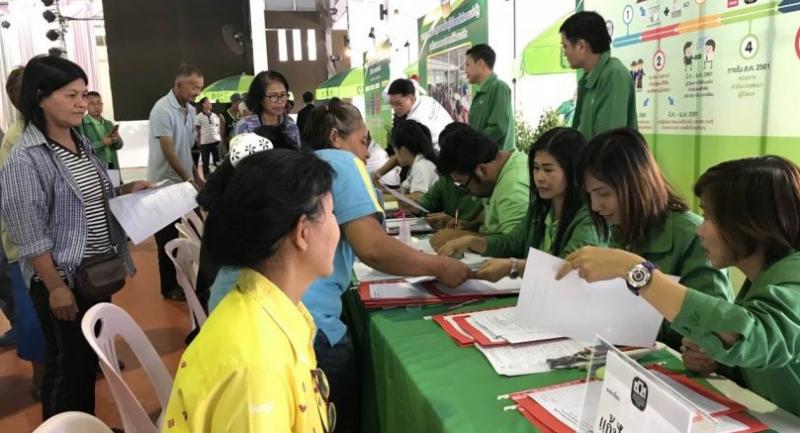 People in Chanthaburi register for a programme to enable debt resolutions as well as for job training under the government's welfare card scheme.

By WICHIT CHAITRONG
THE NATION
CHANTHABURI

FINANCE Minister Apisak Tantivorawong yesterday launched a programme aimed at tackling the problem of underground debts owed by many of the registered holders of the newly issued state welfare card.

The minister told a gathering in Chanthaburi province that the ministry had over the past two years registered 11 million low-income earners as eligible for welfare assistance.

After having arranged for cash handouts via the welfare cards, the ministry is focused on ways to boost the incomes of card holders under the current phase of the scheme. The ministry would do so by working closely with small businesses and other parties to train low-income earners for new jobs or side jobs, Apisak said on a visit to the eastern province.

The Government Savings Bank (GSB) will gather job information for those in the programme and will also provide them with loans to help them start their own businesses.

The first group will receive cash via the welfare card for a total Bt500 a month and the second group will get Bt300 per month.

Apisak said debts owed to underground lenders must be tackled in order to lift these people out of poverty. Loans sharks demand higher interest rates than regulated lending channels, resulting in a vicious circle of debt for the poor. They have re-entered the underground debt scene in the past due to a lack of a comprehensive package to help them deal with their debts. This time, debt resolution would be effective, Apisak said.

Debtors have to give more information about their debts in order for the authorities to help them negotiate with lenders. People are urged to register at debt complaint centres nationwide, said Apisak.

Those underground lenders found to be demanding excessively high interest would be prosecuted, with offenders facing up to two years in prison. The legal limit for interest charged on loans is set at 15 per cent a year.

The Bank for Agriculture and Agricultural Cooperatives and the GSB will provide emergency loans with lower interest rates for those in the government programme in order to prevent them from falling into the underground debt cycle, said Apisak.

The Finance Ministry will step up efforts to educate people under a financial literacy campaign that will help them keep track of their expenses and incomes, the minister said.

The permanent secretary for finance, Somchai Sujjapongse, said that some 1.26 million people nationwide owe a combined Bt68 billion to loan sharks, for an average of Bt54,000. Of these, some 6,427 debtors are in Chanthaburi province.