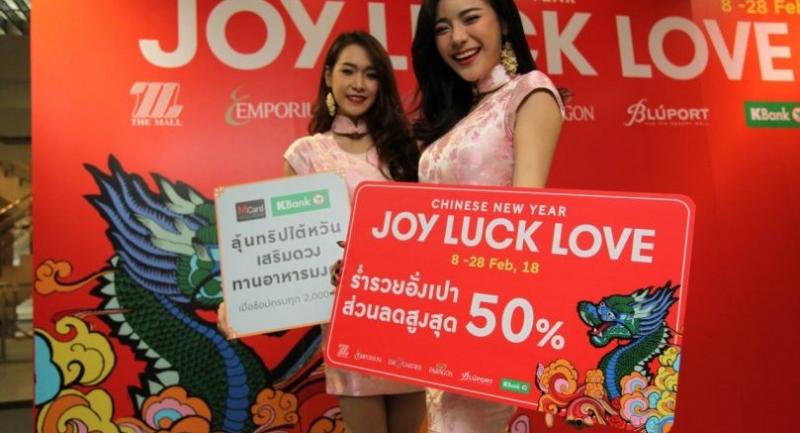 The campaign offers shoppers up to 50 per cent discount on purchases and a chance to win a trip to Taiwan. It is expected to bring in Bt2.7 billion in sales revenue during the period.

The Mall Group’s executive vice president Chamnarn Maytaprechakul said the retail market has been growing since November 2017 when the government announced the shopping tax break. As a result, the The Mall Group achieved its revenue target of Bt56 billion, posting a four per cent growth from 2016.

From the beginning of 2018, consumer spending has remained strong with The Mall’s starting the year with ‘Discount Overload’ from January 31 to February 4, generating at least Bt300 million in sales. The spending trend is expected to continue into Chinese New Year, which falls around Valentine’s Day, with both being spending occasions. Hence, The Mall Group have combined these two occasions for a single campaign, Chinese New Year Joy Luck Love, scheduled for February 8 to 28.

lCustomers will be offered Ang Pao with discount vouchers ranging from 10 to 50 per cent when they spend Bt1,500 to Bt15,000 or use M Card points. Participating credit cards are offering additional discounts, vouchers and cash backs worth up to 20 per cent off.

lEnter for a chance to win a trip to Taiwan to worship sacred sites to enhance fortune and romance, as well as enjoy great meals and popular sites including Sun Moon Lake and Jiu Fen. There are also 10 prizes worth a million baht combined up for grabs.

lFortune for Year of the Dog: Receive fortune reading and premium gifts at The Mall Bangkapi, Bangkae, Korat, Emporium and Paragon.