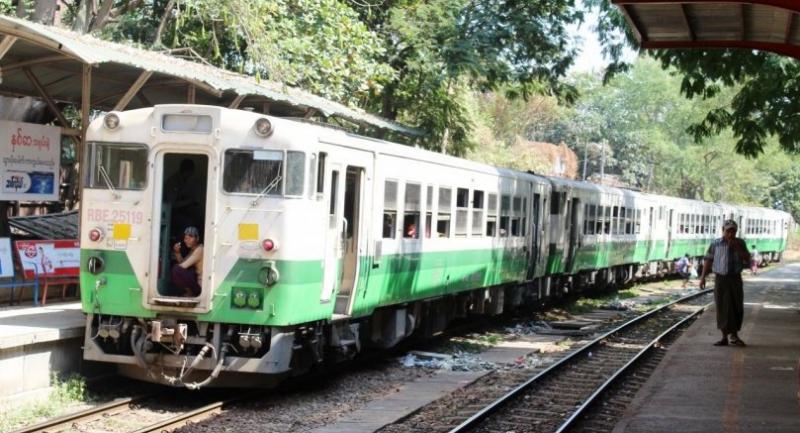 A train on the Yangon circular line leaves for downtown (Photo- Khine Kyaw, The Nation)

Since traffic congestion in Yangon has worsened due to the rise in internal migration, Myanmar has plans to speed up its railway sector reforms from this year onwards, according to a government official.

Ba Myint, senior general manager and project director at Myanma Railways, said state-owned trains  carried more than 47 million passengers last year, nearly two-thirds of whom were served by the Yangon circular rail line. He expects a substantial rise in the number of passengers this year.

“The number of passengers is on the rise every year. We are currently running 23 routes, covering nearly 7,000 kilometres throughout the country. We will mainly focus on improving public facilities as a critical part of our reforms,” he said.

According to the official, Myanmar will prioritise infrastructure development over the next five years. He said US$2.4 billion (Bt75 billion) would be spent for renovation of railฌway stations, maintenance of rail roads, passenger coaches and wagons, and modernisation of existing facilities and systems, chiefly on the Yangon-Mandalay route.

He is open to technical and financial assistance from foreign countries and donor organisations. To him, Japan stands as the most important partner due to its official development assistance programme.

Renovation of the Yangon circular line is under way, estimated at $207 million, supported by Japan International Cooperation Agency.

Additionally, the ExportImport Bank of Korea also pledged to offer a loan of $100 million for the renovation of some routes including Myitkyina-Mandalay route. The Asian Development Bank has approved a loan to modernise the Yangon-Pyay route. Germany will soon provide a grant of 5 million euros (Bt194 million) grant to support Myanmar’s railway sector reforms.

He expects the modernisation and renovation works on the most-crowded Yangon-Mandalay route to commence in the second half of this year, followed by similar works on the Myitkyina-Mandalay, another popular route in Myanmar.

Once infrastructure development works are completed, it will take only eight hours to go to Mandalay from Yangon, saving a lot of time and energy, he said.

Ba Myint said it was out of the question for the state-owned enterprise to be profitable over the next few years.

“Like in many other countries around the world, we need to subsidise the convenience of passengers, over 95 per cent of whom are our citizens. If we make it profitable, it will definitely be a burden on the general public. That is why we always take passengers’ convenience and affordability into serious consideration,” he said.

He pledged to ensure convenience for all passengers and to bring satisfaction to freighters, by having all trains run on time and keeping the number of accidents at the minimum.

Myanmar Railways has more  than 20,000 employees nationwide, and it has plans to build the capacity of all the staff through a number of workshops and training programmes with the support of the Union government as well as foreign organisations.

Ba Myint said expansion of routes would largely depend on public demand. The enterprise, therefore, did not push for building new routes connecting the regional rail link including the Dawei-Kanchanaburi rail line, part of Dawei special economic zone project.

At the 22nd Asean Land Transport Working Group Meeting, Myanmar the rail road project would be considered to improve freight and passenger transport between Dawei and Bangkok. Since Dawei SEZ shows no progress yet, Myanma Railways has decided to build some new routes rather than the Dawei-Kanchanaburi line, he said.

The official said ageing machinery and old train carriages would be gradually replaced with new facilities and coaches. The enterprise has already invited a tender for the supply of train coaches from Japan to be used in the Yangon circular line.

Earlier this month, two Japanese firms, Marubeni Corporation and Niigata Transys Co, secured a $64million deal to supply Myanmar Railways with 24 train cars to be used in the line that runs from Yangon to Taungoo. Delivering the train cars is expected to commence in 2020 after training Myanmar engineers on maintenance.

Occupying a site area of 25.7 hectares with an intended development gross floor area of 1.09 million square metres, the project will include the refurbishment of the station which was built in the 1870s during the British rule.

It will be a mixed development project comprising a new central transportation hub that integrates rail and mass transit, surrounded by amenities of housing and commerce.