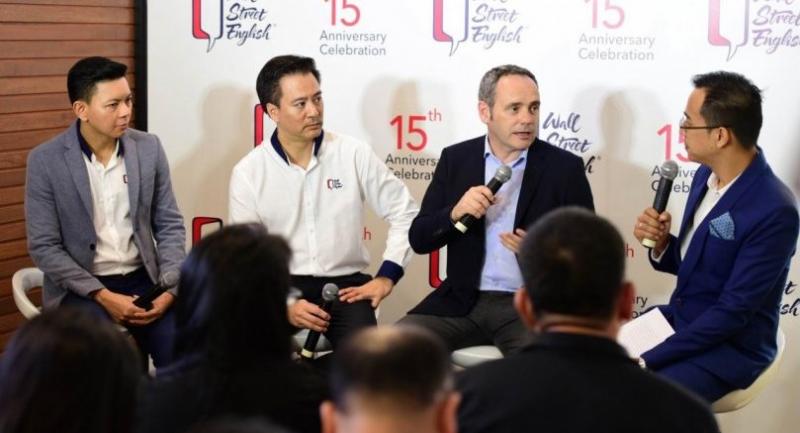 WAVE Entertainment Plc, the licensed operator of Wall Street English (WSE), Thailand’s largest premier provider of English language instruction, is celebrating its 15th anniversary in the Kingdom with an ambitious five-year expansion scheme targeting 20 branches nationwide and a jump in revenue from Bt700 million to Bt2 billion within five years.

The company yesterday signed a contract with Wall Street English International for the right to open Wall Street English’s branches in Laos and Cambodia this year. It plans to open four to five schools in the two neighbouring states to cash in on huge domestic demands.

Wall Street English remains Thailand’s biggest provider of English language training courses for students and adults with a 35 per cent market share. In Thailand, Wall Street English has produced around 190,000 graduates over the past 15 years.

“Wall Street English is No 1 on the market thanks to its global Multimethod learning technique that has received certification by the University of Cambridge in the United Kingdom and the internationally recognised CEFR (Common European Framework of Reference). Globally Thailand represents the second biggest market for Wall Street English after China,” said McGowan.

Wall Street English plans to open new branches in the next five years, hoping to take the total to 20 with a projected revenue rise of nearly 300 per cent to BT2 billion from Bt700 million within five years.

Kichodhan bases his optimism on favorable assessments of Thailand’s growth outlook: rising demand for English language training, freer movement of trade and labour in the Asean Economic Community (AEC), and the current boom in tourism and hospitality.

“With the rise of the AEC, it’s all the more important that we need to communicate in English. Otherwise, our jobs in hospitality for example might soon be taken over by those from other countries like the Philippines and Myanmar. Without English, we cannot compete in the AEC. Let’s not forget: English proficiency in Thailand is among the lowest in the AEC,” he added.

Olarn Phirintharangkoon, CEO of Wall Street English Thailand, concurs, saying “Wall Street English is not just a school, but ‘an English learning and lifestyle centre. Studying at Wall Street English carries great prestige. It feels exclusive to be a part of Wall Street English. That’s why it appeals to the younger generation. This is Thailand’s No1 - the most premium provider of English language instruction. The new-look classrooms at Central Plaza Rama II will attract even more people to come to study here because we’ve got digital learning tools and teachers who are all native English speakers.”

In keeping with the country’s Thailand 4.0 development plan, WSE promotes innovation by introducing digital learning tools , such as digital classrooms. The provision of social clubs in which English is the sole medium of communication is part of WSE’s innovative learning environment, too.

“What Gen Y learners want is speed and convenience. In recent years, Wall Street English's learning development has been aligned with Digital Age 4.0 as evident in our digital classrooms and online lessons that are conveniently accessible at all times, as well as the necessary updates via the WSE Mobile App,” Olarn added.

The target groups of Wall Street English Thailand are divided into three age groups of 17-22, 23-29 and 30 plus, including “new millennials” who consider English as a tool to enhance their independent overseas travels.

The second group is made up of salaried employees of companies from the banking, export, logistics, & hospitality sectors as well as other businesses who need to improve their English proficiency as part of the process for climbing the corporate ladder. Forming the last group are first jobbers, experienced professionals and business owners who are looking to improve their English language skills.

He will represent the new generation and their determination to learn and develop themselves relentlessly in order to achieve their goals in life.