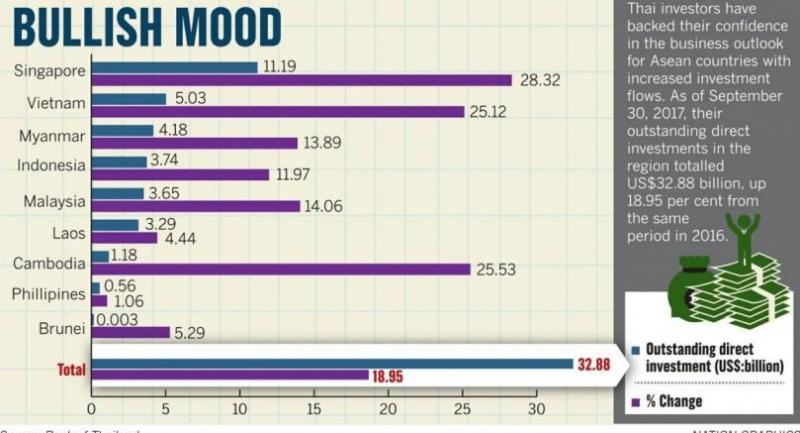 According to a report by the Bank of Thailand, as of September 30, 2017 Thai investors showed outstanding direct investment worth US$32.88 billion (about Bt1.05 trillion) in Asean countries – up 18.95 per cent from the same period last year. Up to 34 per cent of the total, or $11.19 billion, was invested in Singapore, followed by Vietnam, Myanmar, and Indonesia.

While Singapore led the countries attracting Thai investors last year, CLMV countries are expected to be the top five for Thai investors from this year until 2022. This follows the Thai government’s policy to encourage local investors to expand their investment in CLMV. Meanwhile, CLMV governments are also promoting their countries to foreign investors by offering additional incentives (see graphic).

Cambodia’s Commerce Minister Sorasak Pan said in a recent interview with The Nation that his country expects the value of Thai direct investments to double by 2020, driven by an expansion in services, agricultural processing, small and medium-sized enterprises and restaurants.

Similarly, Laos’ Finance Minister Somdee Duangdee has pointed to his government’s effort to encourage foreign investors to do more business in Laos by revising its investment promotion incentive law, providing a one-stop service to interested investors and offering tax privileges for up to 15 years depending on the industry.

Myanmar is in the process of modifying the century-old Myanmar Companies Act, Aung Naing Oo, director-general of the Directorate of Investment and Company Administration (DICA) and secretary of Myanmar Investment Commission (MIC) said recently.

As part of the MIC’s efforts to facilitate foreign direct investment, both local and foreign companies have been allowed to appoint expatriates to the management level and as technical staff including accountants. For its bit, DICA is facilitating stay permits and visa extensions for foreign investors, technicians, and their family members.

Vietnam has also revised two acts governing investments and enterprises since 2015, opening up the opportunity for foreign investors to expand their investment in the country. This has boosted Vietnam’s economic growth beyond five per cent a year.

Cambodia, Laos, and Myanmar have also benefited from the most favourable regime designation availฌable under the EU’s Generalised Scheme of Preferences, namely listing in the “Everything But Arms” (EBA) scheme. The EBA gives the 47 “least developed countries” duty-free access to the EU for export of all products except arms and ammunition.

Siam Cement Group (SCG), a Thail conglomerate in construction, raw materials, petrochemical, and paper industries, can expand its investment by Bt188 billion from this year till the year 2022 by starting with only Bt20 billion this year.

PTT Exploration and Production Plc is considering expanding its energy investments in Myanmar and Vietnam, according to CEO Somporn Vongvuthipornchai.

CP Group also has expanded its agriculture and food processing business in Cambodia, Laos and Vietnam.

Central Group expanded its retail business by taking over Big C in Vietnam and is planning to invest in Laos and Myanmar.

Meanwhile, the Thai government has taken the lead on a master plan for trade and investment collaboration with the CLMV subregion in an effort to ensure all five countries continue to prosper, Deputy Prime Minister Somkid Jatusripitak said recently. “We started to write a master plan to develop trade and investment with Laos after visiting Laos in last year,” said Somkid. “This is a pilot project to negotiate with Myanmar, Cambodia and Vietnam this year.”