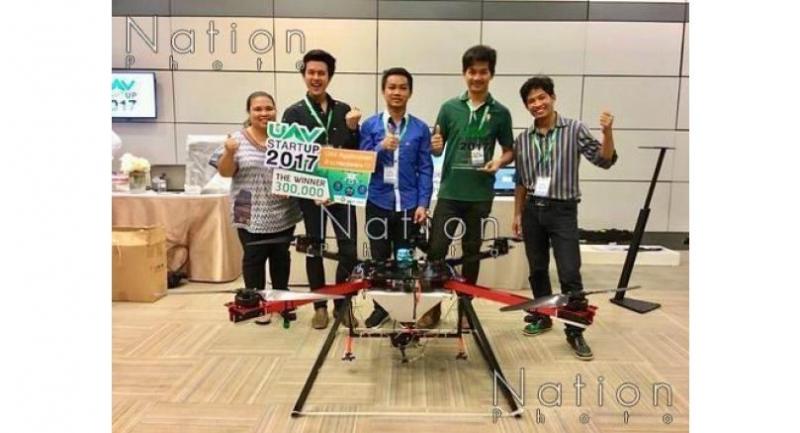 Members of the management team of Novy (2018) Co Ltd show off their drone that will benefit farmers.

VICTORY in a national competition aimed at fostering innovation has spurred five university students and their teacher to set up a company to produce and distribute drones for use by farmers.

The team, from the Robotics Field Institute of King Mongkut’s University of Technology Thon Buri, have lost no time in capitalising on the recognition from their winning entry in the UAV-Startup 2017 competition.

They established the company, Novy (2018) Co Ltd, to provide the drones for the benefit of agricultural producers – especially those with coconut tree plantations.

Kridtat said the inspiration to research and develop the drone for the agriculture sector came from the decision by he and his fellow students to join with Orapadee in the UAV-Startup 2017 programme last year.

“We had been learning about the robotics field and, as a result, we began thinking about how to develop drones for the benefit of our country – as most of the people are still engaged in farming,” Kridtat said in an interview with The Nation.

“Most of them need technology to support them in their efforts to get more yield from their crops. |But this is particularly difficult in the case of coconut trees, given their height.

“Farmers often have trouble knowing whether the trees are affected by pests or weeds. As a result, our group decided to propose our drone project for the UAV-Startup 2017 programme.”

After the project got past the first stage of the competition, the team began their research and development work on the drones after securing Bt200,000 in funding from the UAV-Startup programme for this purpose.

The drone they have developed has a range of functions, such as a camera that can reveal the presence of pests or weeds in a plantation. It also has a spraying system for insect repellent and for fertiliser.

A year after joining the programme, Kridtat and the team were declared the winners of UAV-Startup 2017.

The team took pride in displaying the drone at an exhibition stated by the NIA and GISTDA. Their creation drew plenty of interest from visitors, including those who were keen to buy one.

This interest presented a challenge for Kridtat and his fellow team members to establish Novy (2018) Co Ltd with registered capital of Bt1 million early this year after they gained contracted orders from customers for six drones.

“We do not have enough funds to produce our complete product for sale before we get an order,” Kridtat said.

“Our business model enables us to make the drones for order by our customers, who can pay in instalments throughout the process of producing them. Our drones can also be tailor-made according to our customers’ specifications.”

The six orders are worth a combined Bt1.8 million, based on a unit price of Bt300,000 each. All those who placed the orders are agricultural operators that provide services to farmers, reflecting the fact that the cost of a drone could be too high for many individual farmers, said Kridtat, adding that such an outlay meant the hi-tech devices were suitable for companies providing such agricultural services.

After their initial success with the drone project, Kridtat and his team were also announced as winners in the category of Life Enhancement in the Thai Green Design Awards 2018. The event was held by the Kasetsart Agricultural and Agro-Industrial Product Improvement Institute (KAPI) of Kasetsart University this month.

“This kind of recognition helps us to promote our product to farmers and to carry out further research and development on products that can serve the needs of the country’s farmers,” Kridtat said.