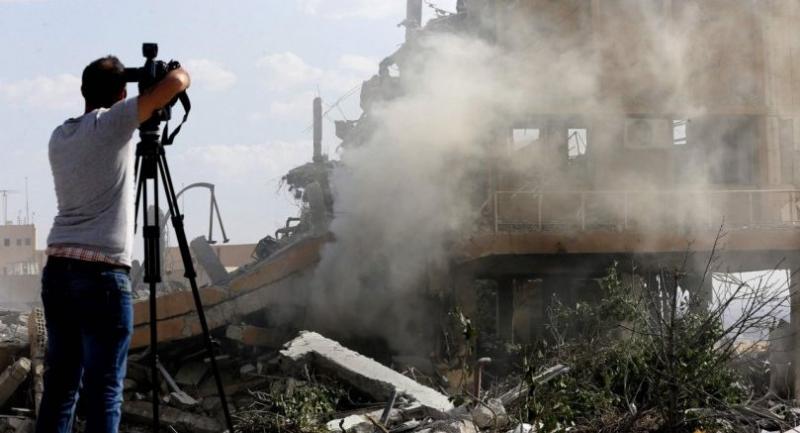 A journalist films the wreckage of a building described as part of the Scientific Studies and Research Centre (SSRC) compound in the Barzeh district, north of Damascus, during a press tour organised by the Syrian information ministry.//AFP PHOTO

Authorities keeping a close eye on economy, security following the strikes on Syria.

WHILE THE air strikes on Syria’s chemical weapons facilities would have a limited impact on the Thai stock market, the overall economy and other national interests, Thailand’s national security agency said yesterday that the country was on alert to prevent other, unexpected consequences.

The United States and its French and British allies launched one-off strikes at three alleged chemical weapons facilities in Syria early on Saturday, after which President Donald Trump announced “mission accomplished” without any civilian casualties.

The strikes neither seriously damaged the facilities – they had reportedly been evacuated beforehand – nor posed a threat to the regime of President Bashar al-Assad.

While the United Nations has vowed to conduct an investigation into Assad’s alleged chemical attacks in Syria, which reportedly killed more than 40 people, Trump threatened that the allies’ attack would be renewed if the regime continued to gas its own people.

The western strikes, however, have created a rift among the superpowers with Russia, a long-time backer of the Assad regime, expressing its unreserved anger. As the one superpower directly involved in the situation, there are likely to be widespread implications on the region and, indeed, the world, said Wanlop Raksanoh, secretary-general of the National Security Council (NSC).

The NSC is optimistic that the situation will not escalate, he said, other than exerting some pressure on the oil price. While Thailand disagreed with the use of chemical weapons, the government wants all parties involved in the dispute to exercise restraint, Wanlop said.

Prime Minister Prayut Chan-o-cha has not yet announced any special measures following the escalation of hostilities, he said, but he noted that Thailand would consider the matter in accordance with international law as a member of the UN.

Regarding the economy, experts said yesterday that the air strike on Syria would have a limited impact on the stock market and the Thai economy, which is estimated to grow slightly over 4 per cent this year, but that oil prices may rise in the short term.

Kobsak Pootrakool, a minister in the Prime Minister’s Office, expected a minimal impact on Thailand’s financial markets. Bourses around the world will reopen after the weekend today but the Stock Exchange of Thailand remains closed for Songkran.

If other markets do not fall much today it would augur well when trading on the SET resumes tomorrow, he said.

Looking at other possible risks to the economy, Kobsak said that geopolitical tensions in many parts of the world would continue to pose risks to the global economy, as well as to Thailand’s. While heightening regional political tensions have started to shake many people’s confidence, Kobsak was not fearful. “Although there are many uncertainties, the Thai economy will grow slightly above 4 per cent,” he said.

Anusorn Tamajai, dean of Rangsit University’s Economics Faculty, said one immediate impact of the air strikes on Syria was likely to be an increase in crude oil prices. Thailand heavily depends on oil imports.

“If the conflict escalates it will adversely impact the global economy and Thailand’s exports in the second half of this year,” said Anusorn.

Kobsidthi Silpachai, head of capital markets research at Kasikornbank, said the trade war between the United States and China may be more serious than the air strikes.

“On Syria, the markets would get panicky if Iran were implicated – that would send signal of a potential oil supply shock,” said Kobsidthi.

Prinn Panitchpakdi, managing director of CLSA Securities Thailand, did not foresee a great impact on the markets because there had been a muted response by Russia and Iran, Syria’s main allies, and no retaliatory action. “Maybe tension on the geopolitical front would cause the oil price to rise further in the short term,” he added. Meanwhile, major concerns have been raised over possible further harm to civilians in Syria.

All precautions must be taken to minimise the harm to civilians from any military action, he said, and people already living in fear of losing their lives from unlawful attacks must not be further punished for the alleged violations of the Syrian government

The Thai Foreign Ministry earlier warned Thai nationals in Israel, notably in the Golan Heights, which borders Syria, to closely monitor the situation and follow advice from local authorities.