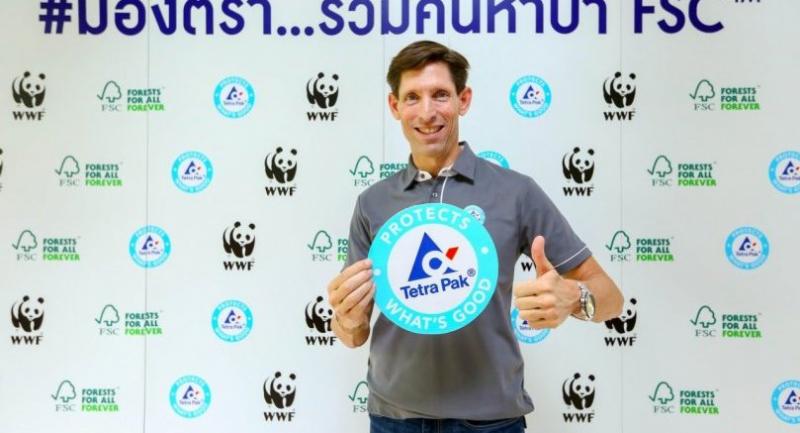 TETRA PAK Thailand, a food processing and packaging services company, in collaboration with the Forest Stewardship Council (FSC) and WWF Thailand, is encouraging Thai consumers to look for the Tetra Pak logo on beverage cartons.

The company says the campaign to encourage consumers to seek out the logo comes under what it calls its MongTra campaign.

The three partners say that that by choosing cartons with the Tetra Pak logo, consumers will get products made from environmentally sound materials - paper sourced from responsibly managed forests, and also support local farming. A talk session with a Thai farmer who owns a Forest Stewardship Council-certified commercial forest in Ratchaburi shows how making the right choices can make a difference in his life. Jeffrey Fielkow, vice president – environment of Tetra Pak Asia, said that the original MongTra campaign was launched in March to urge consumers to look for the Tetra Pak logo before purchasing food and beverages in carton packaging.

“The Tetra Pak logo is a mark of safe, convenient, and environmentally sound products that deliver on the brand’s promise ‘Protects What’s Good’m” he said.

“In this new follow up project, Tetra Pak draws attention to another logo on packs - the FSC label issued by the Forest Stewardship Council.

“FSC is an international non-profit forest certification and labelling system which assures that forest products come from responsibly managed forests.”

Fielkow said Tetra Pak has achieved full FSC chain of custody certification for all converting plants and market companies, so the company can now supply FSC-labelled packages from anywhere in the world. The certification enables wood fibres to be traced at every stage of the supply chain.

“Tetra Pak introduced the FSC certification system to the liquid food carton industry in 2007. Since then, the number of Tetra Pak cartons bearing the FSC label has increased steadily each year to reach 54 billion in 2015,” Fielkow said. “At the end of 2017, Tetra Pak has delivered around 300 billion FSC-labelled packages with 3,300 brands in over 93 countries.

In Thailand, prior to 2016, the percentage of Tetra Pak carton with FSC label was around 4-5 per cent. Working with customers closely, the company has reached 90 per cent at the end of 2017. This means that, out of 100 cartons delivered to customers, 90 cartons are labelled with FSC.”

For this project, Tetra Pak collaborated with FSC Organiation and WWF-Thailand, both international environmental organisations, to increase among Thai consumers the awareness of the FSC label and its benefits on the environment, society and economy, as well to share the knowledge of responsible forest management according to the 10 criteria set by FSC.

“Although the wood fibre used to produce Tetra Pak carton comes from different parts of the world, In Thailand, the FSC criteria and standards have been successfully applied to the management of both local planted forests and commercially planted forests for other products by few companies,” Fielkow said.

After a severe drought, he found out that eucalyptus is drought tolerant, easy to grow and salable. He decided to plant around 150 rai of eucalyptus trees and sugarcane.

He admits that he did not understand the FSC standards at first.

He had gone through a process of trial and error and faced various problems, such as abnormal growth and diseases, until he started working with the Siam Forestry Co Ltd., a packaging subsidiary of SCG.

As the company followed the FSC forest management standards, it educates farmers and helps them improve their practice, leading to better management and higher-quality produce.

“Both FSC and SCG have given me useful information and worked with me. During the early stage, foreign authorities visited and evaluated the farms,” Panomsak said. “When I started off, I had no plan. However, once I adopted the FSC principles, I realised that I needed a feasible plan determining what needs to be done and when. As a result, I was able to grow better produce although it cost slightly more. For example, I had to apply two rounds of fertiliser, but the significant increase in the amount of produce made it worth the investment.

“In terms of quality of life, it has certainly changed for the better. I can now make plans and manage time more effectively and I also have time for other activities and rest. In the past, I only have a small tractor that could not mow grass around the trunks of eucalyptus trees, so I used herbicide.

“After I learned the FSC principles, I replaced the use of herbicide with human labour.

“I am healthier because I do not use chemicals. In the past, there were neither bees nor insects in my farm, but they are here now and we also see some bigger animals as well. So the new practice is better for me, my people and the environment.”

Fielkow said: “Today, we can see that farmers, organisations and entrepreneurs are ready to together protect and take care of forests and the environment; however, in order for this intention to become a great and sustainable force, consumers also have to be attentive to the choices they are making in their daily lives, such as choosing products in FSC labelled packages which guarantee that the products come from responsibly managed forests.

“This helps reduce negative impact on the environment, take care of the society and promote sustainable economy.”