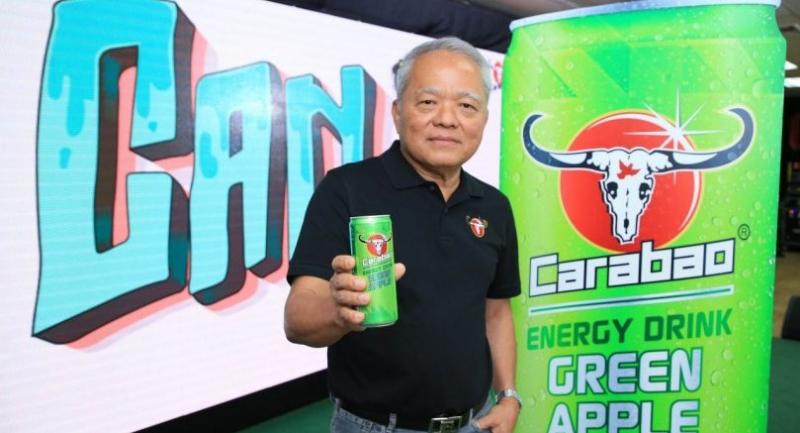 CARABAO has set its sights on becoming the No 1 player in Thailand’s Bt32 billion energy drink market within two to three years under a target to increase its market share from the current 26 per cent to 35 per cent.

To achieve this goal, the company said it will exercise its strengths as a global brand by expanding its market footprint to cover all segments of the market, particularly by boosting its appeal among style-conscious young people.

The company yesterday announced the launch of its first canned energy drink in Thailand, Carabao CAN Green Apple, which it describes “a new great tasting energy drink from the UK” that will be backed a big marketing campaign during the 2018 World Cup.

Carabao has been viewed as taking the energy drink industry by surprise by broadening the brand’s appeal to target so-called Generation Y consumers.

The company says its is offering “a world-class product and world class brand that covers all segments” of the markets with the launch of Carabao CAN.

Carabao CAN Green Apple - with the scent of the fruit - comes with a sophisticated can packaging and will get a big boost through the public relations campaign during the World Cup entitled “Sawasdee World Cup, Get Lucky with Carabao”. Prizes worth Bt3 million will be up for grabs, the company said. The campaign starts today and ends on July 15.

Sathien Setthasit, chief executive officer of Carabao Group Plc, said that in a bid to highlight Carabao as a world-class product and a world-class brand, “Carabao is creating a big phenomenon in the beverage industry once again by stepping up the brand’s sophistication for sustainable growth in the 4.0 world by expanding its customer base to cover all target groups”. This includes the new generation, working-age consumers, and the millennial generation, also called Generation Y, Sathien said.

Sathien said that Gen Y consumers are known for their love of innovations and new challenging experiences. The company is launching Carabao CAN Green Apple under the concept “Don’t Say Can’t, Carabao CAN”.

The drink has enjoyed popularity and been a great success in the United Kingdom. “It’s received certification as a good, quality product with a great taste by the International Taste & Quality Institute (ITQI), one of the world’s leading research institutes that promotes food and drink products with excellent taste.” Sathien said.

The company expects to sell more than one million cans of the new drink in the first three months after the launch. “We have done research and development in taste to please the palates of consumers. Carabao CAN Green Apple is a carbonated drink that refreshes and energises and comes in sophisticated and innovative packaging that is colourful and eye-catching,” Sathien said. “The product is outstanding with a unique taste. At present, Carabao CAN Green Apple is a great success in the United Kingdom and European markets.”

It is set to go on sale at 7-Eleven shops for Bt25 from today. The target group are the millennials, “who are known for their individualism and taste for new positive challenges”, Sathien said.

The company is planning online and offline marketing and public relations campaigns, especially on social media and in collaboration with “world-class influencers” such as players of the Chelsea Football Club and new-generation idols.

The company will also hold promotional activities targeting the new generation and spanning music, art, and graffiti in cooperation with A-list entertainers and celebrities such as TwoPee Southside, Thailand’s best-known rapper, who represents the new generation characterised by their creative ideas and courage to show off their talent in a positive way.

“They are known for never shying away from doing what they love. This marketing strategy will allow the public to see the image of Carabao in a completely new, different perspective that underlines the fact that Carabao is a world-class product and a world-class brand that is ready to reach all groups of consumers that are diverse and unique,” Sathien said. “The product launch marks Carabao’s journey into a new era with its standpoint that is in synch with youngsters’ beliefs and ideas. This kind of image fits well with Carabao’s attempt to be a world-class product and a world-class brand in every era and for the new generation.

“The new product launch is giving a big boost to the Carabao brand’s potential that comes as a new phenomenon in the energy drink industry. The launch will enable Carabao to tap more into a market favoured by the new generation, working-age consumers and Gen Y.”

He said the company is setting its sights on becoming the No 1 leader in the energy drink market in the next two years.

Carabao Group expects its total sales to increase not less than 25 per cent this year, driven by higher exports - especially to CLMV countries (Cambodia, Laos, Myanmar, and Vietnam), Afghanistan and China. The company posted Bt13 billion sales last year, while in the first quarter of this year, the company’s sales reached Bt3.35 billion, which is on track to meet the growth projection.

“Carabao energy drink is No 2 in Thailand’s energy drink market with 26 per cent market share, far larger than the third leader in the marketplace,” Sathien said.

“We want to increase our market share to 35 per cent and to become leader in the next two to three years,” he said. Thailand’s energy drink market has declined by between 2 per cent and 3 per cent annually for the past two years. To welcome the FIFA World Cup, “Carabao is preparing to give happiness to the Thai people”, said Sathien.

The company has teamed up with the private and public sectors to sponsor the live broadcast of the 64 World Cup matches.