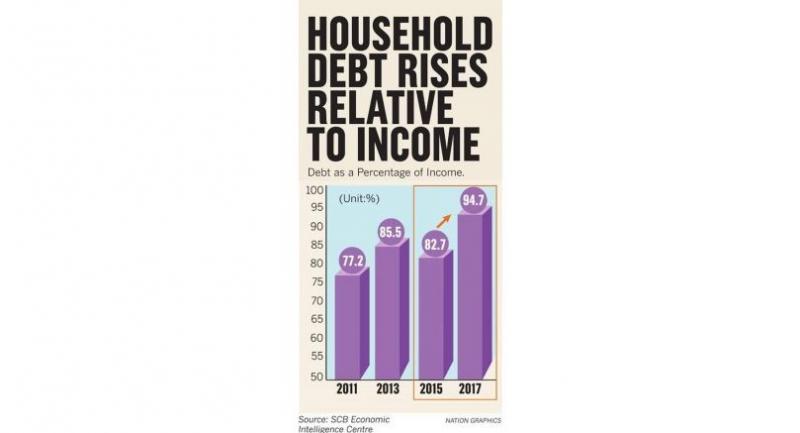 Pointing to the tourism industry, Yunyong said the dive boat disaster that claimed the lives of dozens of Chinese visitors off Phuket last week was unlikely to harm the key economic driver, but the government must act to rebuild confidence in the safety of tourism services.

The SCB Economic Intelligence Centre (EIC) has revised up its projection for economic growth, due increased export and tourism incomes, along with rising investment.

The centre predicts gross domestic product will expand 4.3 per cent year on year from the previous forecast of 4 per cent, Yunyong said.

Regarding household income, he said there were signs of broad-based growth, with the EIC researchers citing an expected boost from farm incomes that began rising in the second quarter of the year. Incomes had earlier contacted for nine consecutive months, he said.

Adding to the optimism is that the average wages of workers outside the farm sector have continued to improve since the beginning of the year. They rose 4 per cent in the first four months after being flat in the previous two years.

The slower growth in wages had been caused by the loss of three million overtime shifts in the past four years as factories adopted automation and robotics systems, Yunyong said.

However, he said the headline figures do not adequately reflect the reality of the household debt burden.

However, for those families coping with debts, the ratio of average debt to annual income has been accelerating at a steady pace. Debt to income was 82.7 per cent in 2015, rising to 94.7 per cent last year, said Yunyong, citing a survey conducted by the National Statistical Office.

“As a result, the benefits from rising incomes will not spill over to consumption as much as they should, as families have to pay off large debts” he said.

Consumption has not seen a broad-based increase. The consumption index expanded 3.9 per cent in the first five months of this year, but the gains were largely concentrated in Bangkok and among higher-income groups. It is expected to grow 3.5 per cent for the full year.

Regarding the outlook for private investment, the EIC forecast it would expand at a moderate rate of 3.5 per cent, supported by public investment and the upcycle in exports. Overseas shipments are expected to rise 8.5 per cent in dollar terms.

As for the risks arising from an escalation in global trade tensions, Yunyong said they had increased in the second half of this year. However, the impact on Thailand’s exports would be limited.

Tourism, one of the key engines for the economy, is expected to expand, Yunyong said. The dive boat disaster – in which 42 Chinese tourists died and a further 14 went missing - is “unlikely to hamper tourism”, he said.

However, the government must respond to the catastrophe decisively, Yunyong said.

He suggested that in the short run, the government has to investigate the cause of the accident in which the boat sank in rough seas on the way back from a popular snorkelling site on Thursday.

“The government must also rebuild confidence among tourists, demonstrating that lessons have been learned from this tragedy and that steps have been taken to prevent a recurrence,” Yunyong said.

No tour bookings have been cancelled since the accident, although it is low season, he said.

He said Thailand would likely welcome 38.2 million foreign visitors this year, up 8 per cent from 2017.

Tourism grew 13 per cent in the first five months of this year, with 27 per cent growth among Chinese travellers.

Public investment is expected to expand 10.7 per cent after a contraction of 1.2 per cent last year. Yunyong expects the central bank will not increase its policy rate from the current 1.5 per cent this year, given the absence any inflation threat.