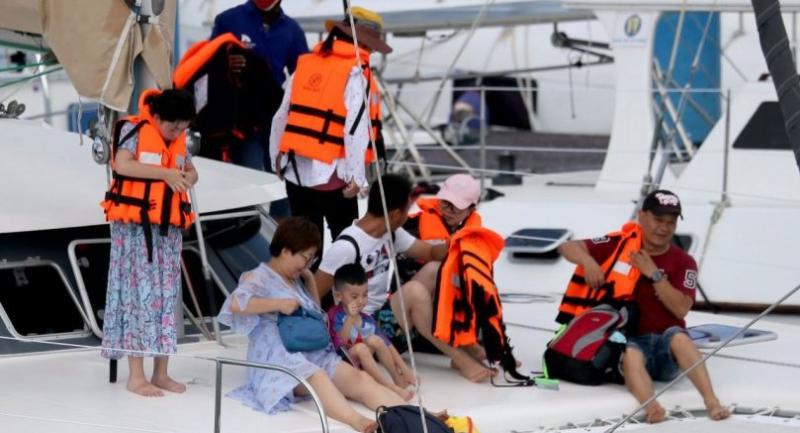 THE COUNTRY needs to urgently improve safety measures for tourists, and Chinese victims should not be blamed for the July 5 Phoenix tour-boat tragedy in Phuket, according to an academic.

“First, we should not blame Chinese tourists if they are customers of a Chinese nominee tour operator – it could have happened to any nationality,” said Thaweesak Paekratok, assistant professor at Naresuan University’s Engineering Faculty, who is calling for an independent investigation of the incident. Thaweesak is currently leading a team to study the safety of sea diving and jet-ski tours, commissioned by the Thailand Research Fund.

He said that by international standards, the safety and security of Thailand’s tourism industry lagged behind internationally, ranking 118 out of 136 countries last year according to the travel and tourism competitiveness report by the World Economic Forum.

According to the Department of Tourism, the number of foreign tourist casualties in Thailand last year went up 25.12 per cent to 936 and of these 265 were deaths, most of them Chinese. He pointed out that one loophole in the law related to transportation and tour operators. Usually, these companies needed to strictly follow safety guidelines: for example they have to appoint a security officer to oversee inspections of the vehicles, be they boats, trucks or buses, and also take heed of other safety measures. However, it is not clear that tour operators who own or hire tour boats follow such safety procedures, Thaweesak said.

The 105-year old Navigation in the Thai Waters Act is obsolete and ineffective in coping with new types of accidents, as in the Phoenix boat case, he said. It also appeared that the crew of the Phoenix boat had not been well trained in handling an emergency situation and may not have been able to help tourists evacuate the sinking boat, he added. This demonstrated that the Marine Department had not provided rescue training to private companies, Thaweesak said, adding that government agencies usually organised rescue drills among themselves but that this did not extend to the private sector.

While reports emerged that there were also Chinese crews in the boat, the question is why did the Marine Department let foreign workers work on the Phoenix? he asked.

Regarding rumours of cheap tour packages, known in Thai as “Tour Soon Rian,” the government can protect tourists by demanding an insurance fee before tourists enter the country. The insurance would cover accidents and other related costs, which could also save the government budget, he said.

Thaweesak suggested that an independent investigation team look at the Phoenix case to ensure that as much as information is collected as possible in order to make tourism safer in the future. So far the investigation was fragmented among state agencies, he said.

“Look at air travel, those who buy cheap tour package do not cause any trouble. Airport authorities will prohibit any aeroplane from leaving the airport when the weather is not safe for flying,” said Thanapong, who is also secretary of Road Safety Policy Foundation.

In this case, we have to look into how the Phoenix was designed and built. Then, why did the Marine Department let the boat leave the port despite warnings of rough seas and bad weather by the Meteorological Department, he said.

The warning system should be overhauled as both the Phoenix sinking in Phuket and the case of the 12 boys and their coach trapped in the cave in Chiang Rai, he said. “By law we cannot order boat operators not to leave port; government agencies can only warn the public about bad weather conditions each day,” he said.

The tragic case of the Phoenix was caused by many factors, including bad weather, inexperience of the boat captain and the condition of the boat itself, he said. Government agencies would have to introduce comprehensive upgrades in safety measures for tourists in order to prevent a recurrence of such an accident, he suggested.

In another development yesterday, Thai and Chinese divers joined forces to retrieve the last of the bodies from the Phoenix, whose sinking claimed 47 lives.

Pongpanu Svetarundra, permanent secretary of the Tourism and Sports Ministry, said the government would pay compensation of Bt1 million for each death and an insurance firm would give an additional Bt1.1 million. He said the tragedy led to a 10-15 per cent fall in bookings for Phuket hotels.