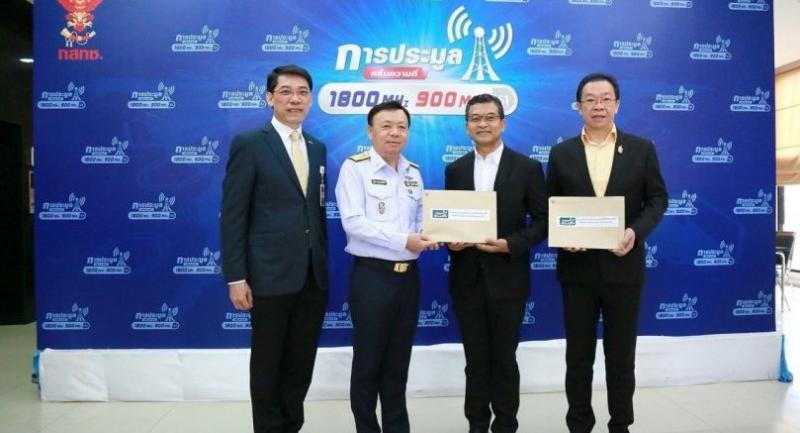 Representatives of AIS group and DTAC group on Monday picked up the applications to contest auctions for licences to offer services on the 900MHz and 1800MHz spectra.

ADVANCED Info Service (AIS) group and Total Access Communication (DTAC) group yesterday picked up the applications to contest auctions for licences to offer services on the 900MHz and 1800MHz spectra.

AIS picked up bid documents for the single licence to be offered on the 900MHz spectrum and for the 1800MHz spectrum, for which nine licences will be put to bids. Its subsidiary Advanced Wireless Network (AWN) also collected one application for each of the spectra offered, as did DTAC subsidiaries DTAC TriNet and DTAC Broadband.

The lone 900MHz licence to be auctioned by the National Broadcasting and Telecommunications Commission (NBTC) will comprise 5MHz bandwidth, and the nine licences for 1800MHz will each be for 5MHz bandwidth.

Potential bidders have until August 7 to pick up the bid applications, which became available on July 9. The forms must be submitted to the NBTC on August 8.

The auctions of the 900MHz licence and the 1800MHz licences will be held on August 18 and 19, respectively.

NBTC secretary general Takorn Tantasith said he was confident many telecommunications operators would take part in the auctions, but that it remained to be seen how many of them would do so.

Earlier, the NBTC had planned to offer only the 1800MHz licences in an auction set for August 4. It had to change the schedule and revise the auction terms and conditions to the present framework after the three telecom operators declined to submit bid applications on the deadline of June 15. All three cited their sufficient bandwidth for long-term needs.

DTAC yesterday raised two concerns on the bid conditions for the 900MHz licence.

The first concern is the requirement for the bid winner to be responsible for installing equipment to prevent a possible jam|in signals between the 900MHz bands used by telecom operators and |the other 900MHz band earmarked for communications involving proposed high-speed train services.

The NBTC will allow the 900MHz bid winner in the upcoming auction to deduct a maximum of Bt2 billion from the licence upfront fee for the cost of installing anti-jamming equipment.

Rajiv Bawa, DTAC’s chief corporate affairs and business development officer, said that the Bt2 billion cap would not cover the cost of filters and implementation incurred by the bid winner, which has to install the system at telecoms operators and for the radio equipment of the planned high-speed train operators. DTAC estimates these costs will be significantly higher than Bt2 billion.

Aside from the costs, the winner of the 900 MHz spectrum will be solely responsible for all operational risks relating to the interference. The installation of filters at the base stations of the other operators – required to be done by the bid winner – would not be possible in practice, Bawa said.

DTAC reiterated its intention to make a thorough assessment of the final auction guidelines before deciding whether to participate in the auctions.

The company remained committed to working with the NBTC to work towards the resolution of the issues it flagged with the 900MHz terms, in order to ensure that the sale for this spectrum has “favourable conditions”, Bawa said in a statement yesterday.

It also placed a bank guarantee for the combined the third and fourth instalments of more than Bt68.045 billion (including VAT) with the regulator.