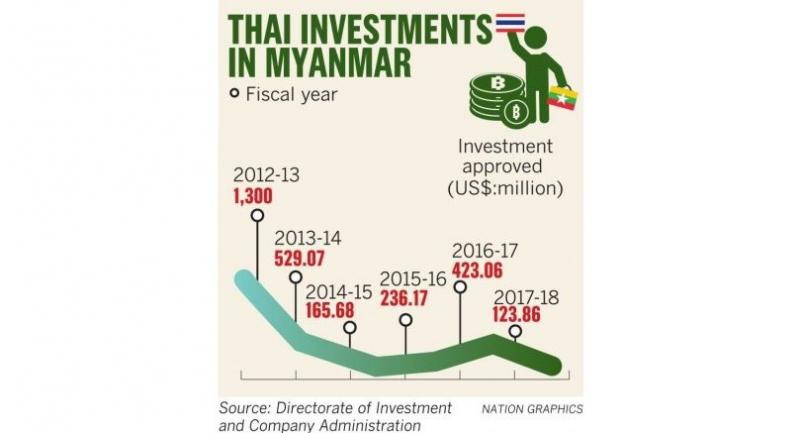 By  KHINE KYAW
THE NATION
YANGON

MYANMAR is confident of attracting more investments from Thailand after a revamped companies law comes in at the start of next month, a senior official investment said.

“We have great potential to welcome a huge influx of Thai investments over the next few years,” said Thant Sin Lwin, deputy director general of the Directorate of Investment and Company Administration (DICA).

“Thai businesses’ interest in Myanmar is on the rise, and bilateral relations have become stronger during the current government term. I am sure we will receive more investments from Thai businesses from now on.”

He said that legislative reforms, including the enactment of the Myanmar Companies Law in November last year to replace a century-old Burma Companies Act, would particularly stoke the interest of Thai businesses to do business across the border.

“We are always open to foreign investors. Over the past two years, DICA has received many Thai businesses that showed their keen interest to invest here. We usually receive potential Thai investors every single month,” he said.

Thant Sin Lwin said he has found that Thai investors are eager to invest in a wide range of sectors, including trading, manufacturing, industry, services and electricity generation - particularly solar and natural gas. He expects Thailand to continue to be among the top investors in Myanmar in the coming years.

Statistics show that Thailand stands third on the list of foreign direct investment (FDI) in Myanmar. As of June 30, 2018, Thai companies have been approved to invest nearly US$11.1 billion in Myanmar, accounting for 14.5 per cent of the total FDI. Only China and Singapore rank above Thailand on the list.

Thai companies that have a presence in Myanmar also remain optimistic about the future of Myanmar. South Asia Law Co, which opened its Myanmar office in 2012, is one of them.

“We have worked on projects in many sectors, involving foreign investment in excess of US$1 billion. We are honoured to be advising the Myanmar government on a very large infrastructure project,” said Gun Vasharakorn, a partner of South Asia Law Co.

“We would expect our investments to expand in the years ahead, through the recruitment of additional lawyers,” he said. Currently, the firm provides advice to potential investors with a blend of Thai, English and Myanmar lawyers.

Gun expects the new companies law to stimulate a renewed investment cycle. He urges businesses to gear up their resources to meet the expected fresh demand.

He believes that now is a good time for Thai businesses to establish their presence in Myanmar, thanks to its huge potential and the closer bilateral ties. Continuity of reforms and stability would make Myanmar even more attractive, he said.

“We noticed a slight hiatus during the transition and like an engine, the speed picks up after the new government settles into place. Ideally, like in every country, stability is a key factor for investors,” he said.

Punnapoj Wongwiwatchai, trade marketing executive at PENS Marketing & Distribution Co, said the firm would expand its business in Myanmar in partnership with a local company. The firm would focus on what they call a “Walking side by side strategy” to distribute consumer goods from Thailand.

“Myanmar plays a key role in our regional expansion. It is a golden destination market for consumer products, as we share a long border area of over 2,000 kilometres, and Myanmar’s purchasing power is expected to rise significantly in the near future,” he said.

Maung Maung Myint, managing director of Decha & Co (Myanmar), said investors from Asean countries, including Thailand, do not appear overly worried about the possible imposition of economic sanctions on the country by the United States and the European Union. However, they have concerns over the management of government ministries. Expensive land prices, the lack of electricity and the bureaucratic administrative system may deter potential investors, he said.