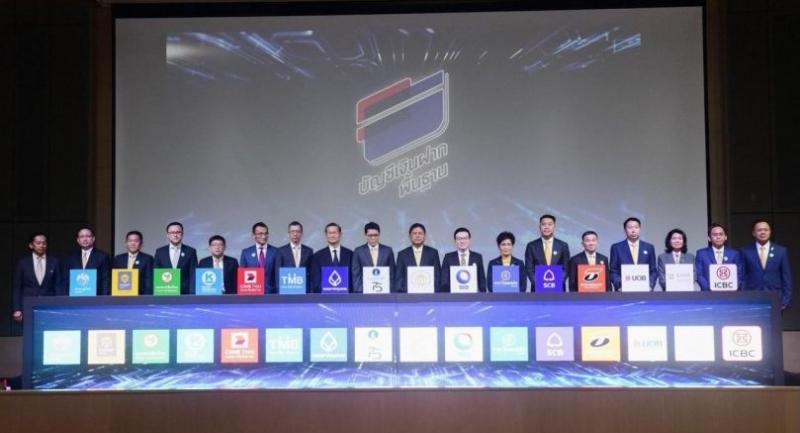 Bankers put on a show of unity after signing the agreement yesterday to provide basic bank accounts for low-income earners and senior citizens.

COMMERCIAL and state-owned banks are joining forces to offer to fee-free basic bank accounts for holders of state welfare cards and senior citizens as part of a drive for sustainable banking being promoted by the Bank of Thailand (BOT).

Under the basic accounts, banks will waive what they call entry fees, along with annual fees and other charges, for the 11.4 million welfare card holders and those aged over 65.

The proportion of households that do not have banks accounts rose to about 30 per cent of all households in 2016, up from 20 per cent in 2013, in an increase that he described as significant, Veerathai said.

Low incomes had barred many people from banks’ deposit services and the high cost of accessing these services, relative to such people’s incomes, was the root of the problem, he said.

Veerathai also expressed his support for two state-owned banks  Government Savings Bank and Bank for Agriculture and Agricultural Cooperatives – for joining in with this effort.

The qualifying customers would be able to use ATM and debit cards and do transactions on mobile phones.

Veerathai said the central bank has been promoting sustainable banking among the country’s banks.

The central bank yesterday also held a forum on sustainable banking, with the event drawing members of the boards of directors of many of the banks.

The central bank wants to create awareness among the directors of their banks’ responsibilities to the environment and for social issues including income inequality, Veerathai said.

Bankers cannot take the attitude that making profits from providing loans for any project that comes along is acceptable, he said, highlighting the instances of when some projects had stalled in the face of community protests over environmental costs or other impacts on people’s way of life.

Around the world, more and more investors want their money channelled towards sustainable projects, the BOT chief said.

Veerathai said that the Bank of Thailand believes that sustainability can be achieved if everyone maintains a focus on longterm goals.

Over the past year there have been many welcoming developments in Thailand’s financial sector, he said.

He pointed to the measures that were introduced to improve financial institutions’ responsibilities, such as regulations on credit cards and personal loans to address the issue of household debt, a new regulatory framework on market conduct, regulations to enhance financial institutions’ corporate governance, and a new code of conduct for banks developed by the banking community.

On the debt front, Veerathai said the establishment of a debt clinic had facilitated multicreditor debt settlements for indebted individuals so that they can exit from a state of perpetual debt distress.

For a third example, he pointed to the number to the many developments that had been pursed to help promote financial inclusion and the transition of the economy towards the digital era.

One in particular, Veerathai, said, is the introduction of PromptPay, which provides efficient access to electronic payment at no cost and has served as a catalyst leading to the elimination of fees for electronic funds transfer by banks.

These developments have contributed to improved efficiency in the financial system, he said, along with wider access and greater affordability of financial services, especially to those underserved groups.

Veerathai said there had been a mitigation of the impacts of several longterm issues. “Essentially, such progress can help ensure that our financial system can sustainably serve the wellbeing of the Thai people,” he said.