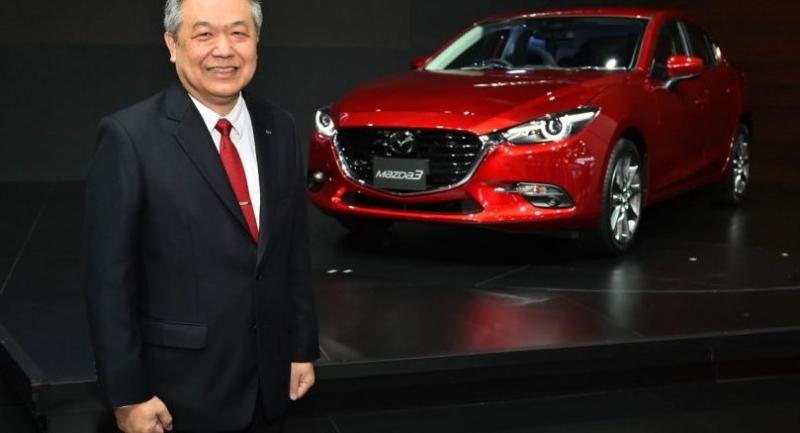 IF ONE had to pick the one brand that made the biggest difference in the Thai automobile market during the past 10 years, it has to be Mazda.

The Hiroshima-based manufacturer has long been present in Thailand, but only as a small player with 1.8-per cent market share in 1998 coming from sales of just 11,187 units. Mazda was considered a small player in the market behind Toyota, Honda, Nissan and Mitsubishi.

Fast forward 10 years and Mazda has emerged as the No.3 brand in the Thai passenger car market leaving bigger rivals behind, thanks to high-volume models such as the Mazda2 subcompact. The company plans to sell as many as 65,000 vehicles in the Kingdom this year for a market share of 6.5 per cent.

So far this year Mazda has had a tremendous performance, selling 33,593 units from January to June to claim a 6.9-per cent market share, a record for the brand in Thailand.

In 2017, Thailand was also the market with the highest growth for Mazda worldwide at over 30 per cent, and in terms of market share, Thailand’s 6.3 per cent is the second-highest in the world for the company (after Australia with 10 per cent). Apart from offering products with high technology and premium quality rather than trying to lower cost and compete in the lower segments of each market, Mazda has also given much importance to the local management.

Mazda is one of the few automobile companies in Thailand that is headed by a Thai national, supported by a team of Thai executives.

In July 2016 Chanchai Trakarnudomsuk was appointed as president of Mazda Sales (Thailand) Co Ltd (MST), the Mazda distributorship in Thailand, and a new management restructuring took place soon afterwards. Thai executives at Mazda were promoted to lead all departments ranging from corporate planning, accounting and finance, sales, marketing, after sales, logistics and spare parts, leaving only one Japanese executive at the management level.

Meanwhile, production of several important Mazda models has been relocated from Japan to other production bases including Thailand, which is the first integrated Mazda production centre outside of Japan. Thailand is now capable of producing engines and transmissions apart from carrying out assembly of the Mazda2, Mazda CX-3 and Mazda BT-50 PRO at the AutoAlliance Thailand plant in Rayong. It has also started production at the Mazda Powertrain Manufacturing Thailand (MPMT) plant for auto parts, body structures, engines and transmissions and earlier this year raised production figures further.

Chanchai, who was previously senior vice president at AAT in charge of production and quality control before moving to MST, told The Nation Weekend in an exclusive interview that he never expected to be in this position.

“I worked with Nakamine-san for four years at AAT and at first, I doubted that he could handle the job because he did not come from the production field and was more involved with corporate work,” Chanchai said. “I wondered how he can do it, but after working with him, I found that he understands people and human nature, and is also a great negotiator and speaker. He helped the AAT team to grow significantly.”

Nakamine returned to Hiroshima after his term and was responsible for sales, allowing him to maintain communication with Chanchai at the AAT plant.

“One day he asked me whether I wanted to change roles,” Chanchai recalled. “I was shocked and I asked him why?”

Nakamine told him that in Thailand, most of Mazda dealers are Chinese-Thais and communicating is a problem.

“The communication was not smooth and the idea was to have a Thai leadership. But we didn’t have a suitable Thai executive at MST for the position at that moment,” Chanchai added. “So I said that I’ll try.”

It was indeed a try, as Chanchai was still employed by AAT and was transferred to MST. “I thought that if after a year it didn’t work, I would go back to AAT.”

During his first year at MST, Chanchai had to learn virtually everything as he had no sales or marketing knowledge.

“I was dumbfounded and I didn’t know what to do, but the team helped me out significantly. What I found out was that dealers are not like suppliers. With suppliers, you just place the order and get the prices you want. But with dealers, you need to beg them to sell the cars for you,” he said.

One of his biggest missions at MST was to reorganise the Mazda dealership in Thailand, setting one standard across the country with the new Mazda Corporate Identity (MCI) concept.

“The problem was that our dealers didn’t make much profit, so they didn’t want to invest in showroom improvements,” he said. “We had to adjust the margins so dealers were profitable as well as making sure they make enough money from servicing because new cars carry low profits.”

A proposal was made to the headquarters and, after the green light for the new margins was given, the dealers soon saw the investments bearing fruit. “Some dealers that used to sell 30-40 cars per month are now selling 60, 80 and 100 per month. Some go as far as 400 units per month,” Chanchai said.

The numbers of Mazda showrooms and service centres have also been growing steadily in harmony with rising sales. Before the end of this year there will be new Mazda showrooms by the Phra Nakorn Automobile (PNA) group as well as Benz Ramkhamhaeng Group, Chanchai added.

“Our goal is to have showrooms covering all sales areas and provinces with high potential. Presently, we still don’t have enough, for example in Nakhon Ratchasima, where we are negotiating with local investors to have more outlets,” he said.

At MST, Chanchai has been laying down the same principles as AAT, which is “top executives in every position must have a successor, and the same thing must happen at the next level too.”

Company executives are also rotated to different positions to create all-round capability. “I try to prove to the headquarters what our Thai executives can do, as well as explaining to them what is unique about the Thai market,” said the 53-year-old executive.

“We came the right way and the results have confirmed that,” Chanchai stressed. ”We don’t have just good products but we are also good sellers.”

In the longer term, Mazda wants to achieve a market share of 8 per cent in Thailand by 2021. New products to be launched before that include the Mazda3 next year, the CX-3 (and CX-8) in 2019 and the Mazda2, its best-selling model here.