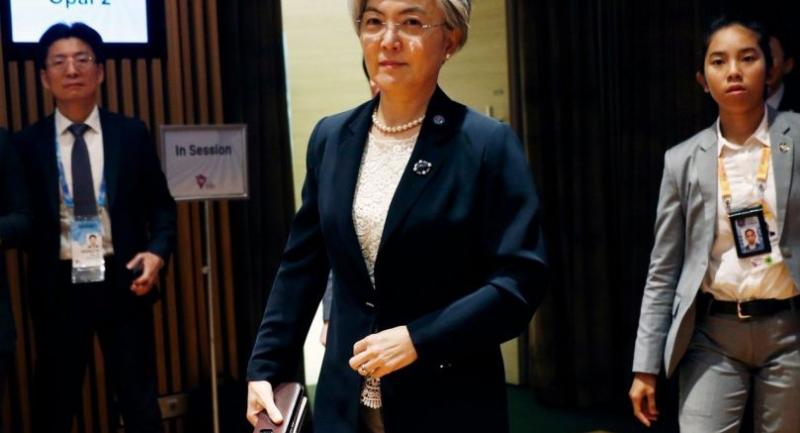 Asian countries have voiced concern about the potentially devastating impact of a US-China trade war, with ministers calling for the acceleration of talks for a gigantic Beijing-backed free-trade deal that excludes the United States.

Fear that a simmering trade spat between the world's top two economies could spiral into a full-blown trade war -- with painful consequences for China's neighbours -- was among topics dominating discussion at a regional summit in Singapore on Saturday.

Tit-for-tat tariffs have fuelled months of tensions that were notched up Friday as Beijing threatened to impose levies on $60 billion of American goods, from beef to condoms.

The measures, which the White House ridiculed as "weak" but China said were "fully justified", came after Washington said it would increase the rate of additional tariffs on Chinese goods worth $200 billion.

The prospect of a trade war is a "real threat" to Asian countries, Malaysian Foreign Minister Saifuddin Abdullah told reporters Saturday on the sidelines of the summit.

"The threat is making many countries very concerned and... is becoming more complex," he said.

Other top Asian diplomats at Saturday's forum, hosted by the Association of Southeast Asian Nations (ASEAN), spoke out against protectionism, warning that it places the region's development in jeopardy.

Countries in the region must "explore creative ways to further deepen and broaden our cooperation", in the face of such challenges, she said.

Some ministers have called for the early conclusion of talks for the Regional Comprehensive Economic Partnership (RCEP), a 16-nation pact poised to become the world's largest free-trade agreement, covering about half the global population.

The planned RCEP deal would group the 10 members of the Association of Southeast Asian Nations (ASEAN) plus China, India, Japan, South Korea, Australia and New Zealand.

'Protectionism on the rise'

But it would not include the United States, which had been leading another regional trade pact -- the Trans-Pacific Partnership (TPP) -- until US President Donald Trump abruptly abandoned it last year.

Even with the lure to access to the world's largest economy withdrawn, the eleven remaining TPP countries, who make up 13.5 percent of the global economy, signed a slimmed-down version of the pact in March.

It cuts tariffs and requires members to comply with a high level of regulatory standards in areas like labour law and environmental protection.

Nonetheless, Washington's abandonment of TPP has given the RCEP negotiations a fresh shot in the arm.

"Given the current global situation where protectionism is on the rise, Japan would like to achieve a swift conclusion of our RCEP negotiations," Japanese Foreign Minister Taro Kono said.

Singapore's Prime Minister Lee Hsien Loong has said he hoped the RCEP pact would be complete by the end of the year, while Foreign Minister Vivian Balakrishnan urged countries facing "headwinds against free trade" to rally together.

The US imposed 25 percent tariffs on $34 billion of Chinese goods in early July, sparking retaliatory measures from China.

Days later, Washington unveiled a list of another $200 billion in Chinese goods from electrical machinery to seafood that would be hit with 10 percent import duties.

Trump upped the ante this week by threatening to lift the tariff rate to 25 percent.

US Secretary of State Mike Pompeo defended the US position and hit back at China.

"President Trump inherited an unfair trade regime where American workers and American companies were not treated reciprocally by the Chinese," he said Saturday.

"Efforts of the Trump administration are to right that, to correct it, to adjust that."