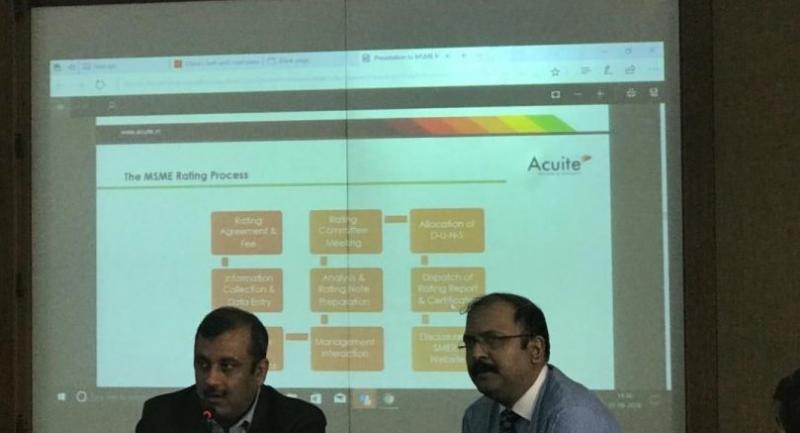 Satishkumar Rao, left, executive director of Hindusthan Microfinance Pvt, and Anil Jadhav, chairman, share their experiences of microfinance lending in India with Thai participants in a roundtable discussion in Mumbai.

THE integration of cashless technology in microfinance lending in Mumbai is being studied as a model for how the innovation’s success in India’s business hub can be applied to help the urban poor in Thailand.

Microfinance operators in India have begun incorporating financial technology into their practices to cut operating costs and encourage poor people to open accounts with banks.

“When we started to apply cashless lending and cashless repayment collection, we at first feared that there would be an objection from borrowers, but they did not object,” said Satishkumar Rao, executive director of Hindusthan Microfinance Pvt. Ltd.

Rao was speaking at the “Maharashtra-Thailand Roundtable Discussion on SMEs”, co-hosted by the Minister of Industry and Mining of Maharashtra state, Subhash Desai, and Ekapol Poolpipat, consul-general of the Thai consulate in Mumbai, last week in the Indian mega-city.

In the past microfinance staff would deliver cash and collect repayments in cash from borrowers, but most of the poor are not be able to access banking services.

The cashless lending has dramatically reduced operating costs by 80 per cent, as the cost per each debt collection was 18 rupees (Bt10.80) previously. Now it is only 2 rupees,” said Anil Jadhav, chairman of Hindusthan Microfinance. Cashless lending does not mean there is no face-to- face contact with customers, as employees at Hindusthan do meet borrowers on a monthly basis, according to the two executives.

They said that even though they offer clean loans, debt default is not an issue, as non-performing loans amount to only 0.5 per cent of total loans. The women are responsible for repaying their debts. To prevent over-borrowing, the central bank of India limits maximum lending to each person to only 100,000 rupees.

The lending average at Hindusthan Microfinance for each borrower is 25,000 rupees. Meenal Patole, managing director of Agora Microfinance India Ltd, said that her company lends under cashless channel, but the collection of repayments is in cash. She said her company did not aim to make a high profit from lending, so if borrowers cannot make a repayment, the company will take into account family conditions or whether they face serious issues such as illness in the family. If a borrower fails to pay back a debt without good cause , he or she would be put on a black list, she said.

Wimonkarn Kosumas, deputy director-general of the Office of Small and Medium Enterprises Promotion, said Thailand should learn microfinance lessons from India, given the success there. In Thailand many poor people cannot access bank loans, she said.

India also has a credit rating system for small and medium-sized enterprises (SMEs) and it helps SMEs to access bank loans and to enter the value chain of production operated by the large companies, said Wimonkarn, who also atttended the roundtable talks.