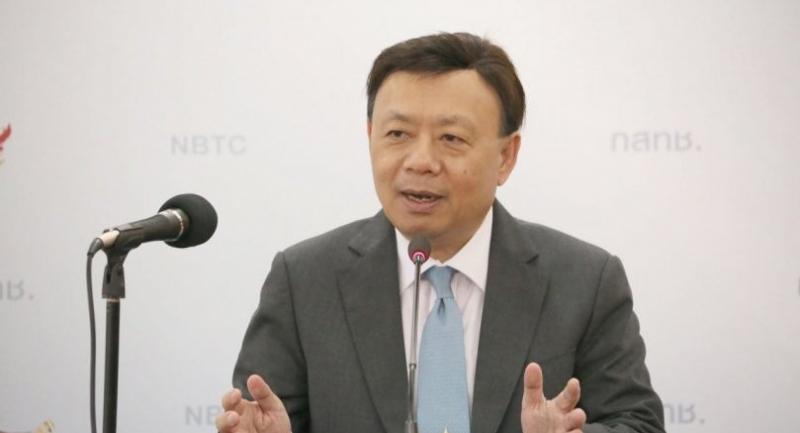 THE NATIONAL Broadcasting and Telecommunications Commission (NBTC) board yesterday approved the outcomes of the bidding by mobile operators for licences on the 1800MHz spectrum on Sunday, NBTC secretary-general Takorn Tantasith said.

DTAC TriNet (DTN), a subsidiary of Total Access Communication (DTAC), and Advanced Wireless Network (AWN), a subsidiary of Advanced Info Service (AIS), have been declared the bid winners. Each bid for one lot of a licence by proposing the same final total price of Bt12.511 billion.

The NBTC made available nine lots of the 1800MHz spectrum at the weekend auction. It will make an analysis report on how it should revise the auction rules governing the seven remaining lots for 1800MHz licences and the unsold 900MHz licence in order to woo more prospective bidders to step forward for them in the future. Takorn said that the starting bid prices of these unsold lots are unlikely to be lowered but the terms of payment for the upfront fees might be extended.

For example, the annual instalment payment period of the upfront fee of the unsold 1800MHz lots might be extended from five years to six, instead of the three years that applied under the auction rules on Sunday.

The NBTC will also see if it has to revise the conditions for the 900MHz auction rules, which some prospective bidders said would lead to their incurring operational risks and unpredictable costs. The auction conditions state that the winner of the 900 MHz licence is solely responsible for any and all interference on this 900MHz slot that may rise from the portion of the band allocated for proposed railway projects.

Once finished, the NBTC will present all the material from the analysis at a public hearing.

The NBTC will also carry out analysis on whether it should stand firm on its decision to assign the 900MHz band to the proposed high-speed train project or assign other bands to the project instead.

In a related matter, DTAC has asked the NBTC to consider granting a remedy period to the company.

DTAC currently uses 25MHz of the 1800MHz spectrum to provide services under a concession from CAT Telecom. As DTAC TriNet and AWN each won the right to use 5MHz of this same band from the Sunday auction, DTAC has asked the regulator to grant the remedy period to cover the remaining 15MHz for it after the CAT concession ends on September 15.

The remedy period refers to the duration the NBTC would allow telecom operators to continue using existing spectra to offer services on an interim basis after their concession ends. This is to give them time to migrate all customers to other networks.

CAT has granted this 25MHz of 1800MHz to DTAC. The NBTC reclaimed this band and put it in the auction on Sunday.

The NBTC's telecom subcommittee will look into DTAC’s request next week. Takorn said that the case should be determined before September 15.