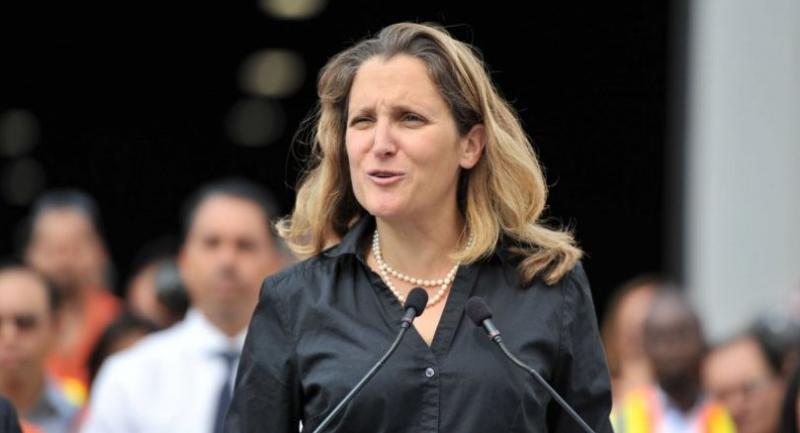 With a deal with Mexico out of the way, US trade officials are due to resume talks with Canada on Tuesday to try to salvage the North American Free Trade Agreement as a trilateral deal.

After months of intense negotiations, the United States and Mexico announced an agreement Monday on a thorough overhaul of the 25-year-old free trade pact, but President Donald Trump suggested he could cut Ottawa out.

Canadian Prime Minister Justin Trudeau stressed in a phone call with Trump that the aim is to reach a new NAFTA deal.

The leaders "had a constructive conversation" on NAFTA, and "look forward to having their teams engage this week with a view to a successful conclusion of negotiations," Trudeau's office said.

Canadian Foreign Minister Chrystia Freeland interrupted a trip to Europe to rush back to Washington to begin talks with US Trade Representative Robert Lighthizer.

The outlines of a NAFTA 2.0 are now on paper, including provisions on auto trade, tougher worker protections and a provision to review the deal every six years.

"It's a big day for trade. It's a really good deal for both countries," President Donald Trump said in announcing the agreement from the Oval Office, with Mexico's President Enrique Pena Nieto participating by telephone.

Negotiators have worked for a year to update and rewrite NAFTA, but in the last five weeks Washington and Mexico City worked to resolve their bilateral issues without Ottawa.

Trump stressed that he could go ahead without Ottawa in the new agreement.

"We could have a separate deal or we could put it in the same deal," Trump said.

He indicated he would take a tough line with Canada on autos and dairy tariffs, long a source of tension between the neighboring countries.

There is some urgency as the US seems keen to have the issue resolved before the November midterm elections, and Pena Nieto wants to sign before handing the reins over to Lopez Obrador on December 1.

But Canada may not feel the pressure to hurry. Freeland's spokesman Adam Austen said in a statement Canada "will only sign a new NAFTA that is good for Canada and good for the middle class. Canada's signature is required."

Mexican officials have insisted all along that the NAFTA must be a trilateral deal, but also acknowledged that either way it will have free trade commitments with both nations.

Lighthizer said the administration would notify Congress by Friday of the new agreement, which would allow the required 90 days' notice to get the pact signed by December 1.

However, it was unclear whether the administration has the authority to substitute NAFTA with a two-nation trade agreement.

The Canadian team could be more amenable to the talks now that the United States has backed away from a controversial and strenuously-opposed provision to require the three nations to renegotiate NAFTA after five years.

Instead, senior US officials told reporters the agreement had been extended for 16 years but would be reviewed every six years. If the parties agree to continue with no changes, it will be renewed for another 16 years.

However, if the governments want to make changes, they will negotiate while the agreement remains in place, giving them a longer time horizon of 10 years to make changes, which is less likely to spook investors and businesses.

"It's an alternative to sunset which we think works," another senior official said.

And in fact, financial markets were delighted by the news with the S&P 500 and the tech-dominated Nasdaq stock indexes hitting fresh records at the close Monday.

Mexico's peso strengthened against the US dollar, as did the Canadian dollar, while the US dollar index weakened slightly.

Lighthizer told reporters in a call that the agreement with Mexico provided the "highest standards" of any existing agreement on digital trade, financial services and labor rights.

"We had a NAFTA agreement that had gotten seriously out of whack, that led to large trade deficits and needed updating," Lighthizer said.

A key element of the US-Mexico talks has been content requirements for autos, which Mexico agreed to increase to 75 percent from North America to get duty free NAFTA treatment.

The sides also agreed that 40-45 percent of cars must be made at "high wage" factories where workers receive $16 an hour in order to receive duty-free treatment, something that could deter off-shoring US auto manufacturing to Mexico.

Lopez Obrador, a leftist free-trade skeptic who won a landslide election victory on July 1, said he considered it a good deal for Mexico.