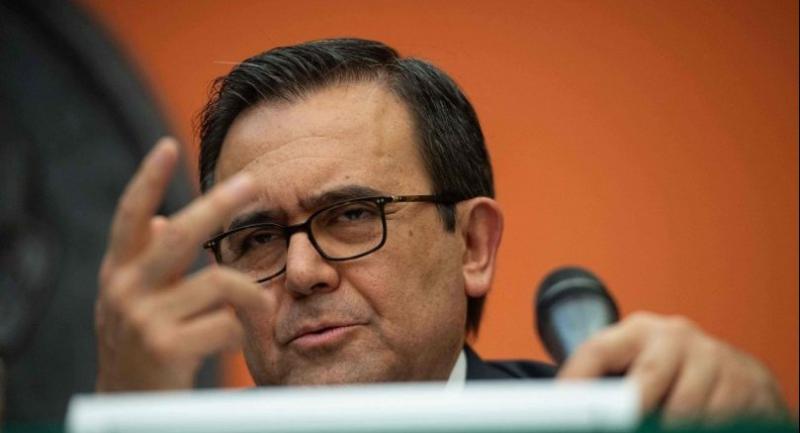 Mexican Economy Secretary Ildefonso Guajardo speaks at a press conference at the Mexican embassy in Washington, DC, on August 27, 2018.

After months of intense negotiations the United States and Mexico agreed Monday on a thoroughly overhauled free trade pact, while talks with Canada are to begin Tuesday.

But the 25-year-old North American Free Trade Agreement now enters a new phase of uncertainty, with Canada's foreign ministry insisting that country's signature is "required" while President Donald Trump suggested he could cut Ottawa out of the deal.

Trump also confused matters by saying he would terminate NAFTA and wanted to change the agreement's name.

"It's a big day for trade. It's a really good deal for both countries," President Donald Trump said in announcing the agreement from the Oval Office, with Mexico's President Enrique Pena Nieto participating by telephone.

With the outlines of a NAFTA 2.0 now on paper, including provisions on auto trade, tougher worker protections and a provision to review the deal every six years, a spokesman for Canada's top diplomat and trade negotiator said Chrystia Freeland would travel to Washington on Tuesday to rejoin the talks.

Negotiators have worked for a year to update and rewrite NAFTA but in the last five weeks Washington and Mexico City had worked to resolve their own differences without Ottawa.

Trump stressed that he could go ahead without Ottawa in the new agreement.

"We could have a separate deal or we could put it in the same deal," Trump said.

He indicated he would take a tough line with Ottawa on autos and dairy tariffs, long a source of tension between the neighboring countries.

"We hope Canada is watching carefully on how successful negotiations can go."

Not a sunset clause

Mexican officials have insisted all along that the NAFTA must be a trilateral deal.

"It is our wish, Mr. President, that now Canada will also be able to be incorporated in all this," Mexico's Pena Nieto told Trump.

Pena Nieto said on Twitter he had spoken to Trudeau on Monday, urging Ottawa to rapidly rejoin the talks with the goal of reaching a final NAFTA rewrite this week.

The logistics were complicated by the fact Freeland was on a week-long European trip but her spokesman Adam Austen said Tuesday she would travel to Washington on Tuesday "to continue negotiations."

"We will only sign a new NAFTA that is good for Canada and good for the middle class," he said in a statement. "Canada's signature is required."

The Canadian team could be more amenable to the talks now that the United States has backed away from a controversial and strenuously-opposed provision to require the three nations to renegotiate NAFTA after five years.

Instead, senior US officials told reporters the agreement had been extended for 16 years but would be reviewed every six years. If the parties agree to continue with no changes, it will be renewed for another 16 years.

However, if the governments want to make changes, they will negotiate while the agreement remains in place, giving them a longer time horizon -- less likely to spook investors and businesses.

"It's an alternative to sunset which we think works," another senior official said.

And in fact financial markets were delighted by the news with the S&P 500 and the tech-dominated Nasdaq stock indexes hitting fresh records.

Mexico's peso strengthened against the US dollar, as did the Canadian dollar, while the US dollar index weakened slightly.

US Trade Representative Robert Lighthizer told reporters in a call the agreement was "historic" and provided the "highest standards" of any existing agreement on digital trade, financial services and labor rights.

"We had a NAFTA agreement that had gotten seriously out of whack, that led to large trade deficits and needed updating," Lighthizer said.

The labor protections are "stronger and more enforceable than any agreement by a mile. It's not even close." And he said the new pact would create jobs in the United States and Mexico.

Lighthizer said the administration would notify Congress by Friday of the new agreement, which would allow the required 90 days' notice so that Pena Nieto could sign the deal before handing over the Mexican presidency to President-elect Andres Manuel Lopez Obrador on December 1.

A senior administration official said the notification would highlight the US-Mexico deal with the hope that Canada would join, but said Trump's reference to terminating NAFTA -- which the president called a "rip-off" for the us -- was simply a matter of replacing the old deal with a new one.

However, it was unclear whether the administration had the authority to substitute NAFTA with a bilateral trade agreement.

Mexico's Foreign Minister Luis Videgaray told reporters that if the United States and Canada fail to agree to the new terms, Mexico would still benefit from an existing pact with Ottawa through the Trans-Pacific Partnership -- the deal Trump withdrew from as soon as he took office.

A key element of the US-Mexico talks has been content requirements for autos, which Mexico agreed to increase to 75 percent from North America to get duty free NAFTA treatment.

The sides also agreed that 40-45 percent of cars must be made at "high wage" factories where workers receive $16 an hour in order to receive duty-free treatment, something that could deter off-shoring US factories to Mexico.