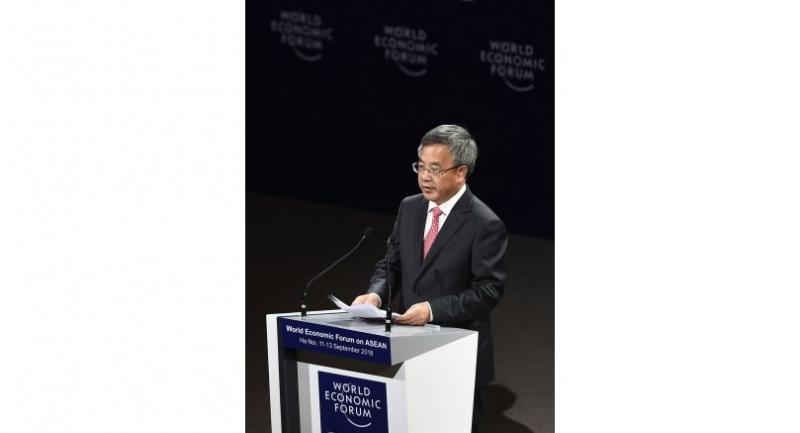 Chinese Vice Premier Hu Chunhua delivers his address at the opening of the World Economic Forum on ASEAN at the National Convention Center in Hanoi on September 12, 2018./AFP

China warned Wednesday that protectionism poses a "serious hazard" to growth and cautioned "individual countries" against isolationism, in a veiled reference to the deepening trade spat between Washington and Beijing.

The comments from China's vice premier comes as the world's top two economic powers edged closer to an all-out trade war after imposing tit-for-tat tariffs on billions of dollars of imports.

Tensions were heightened last week when President Donald Trump threatened to hit all China's exports to the US, worth more than $500 billion as he doubles down on "America First" agenda he says aims to protect jobs and industries from overseas competition.

But without directly naming Trump or the United States, Hu Chunhua warned on Wednesday against countries going it alone and upending the globalised trading system.

"Some individual countries' protectionist and unilateral measures are gravely undermining the rules-based multilateral trading regime, posing a most serious hazard to the world economy," Hu said at the World Economic Forum in Hanoi.

"Self-isolation will lead nowhere and only openness for all represents the right way forward," he added.

The escalating trade spat between Washington and Beijing is being closely watched in Southeast Asia where some export-focused economies may be set to gain from the fallout.

Rising labour costs in China have already precipitated a push into countries such as Vietnam and Cambodia where Adidas shoes, H&M T-shirts and Samsung phones are made on the cheap.

But the trade war has accelerated that process, with several Chinese firms turning to the region to produce items from bike parts to mattresses in a bid to avoid the US tariffs.

"But I think they see it on a net basis as a gain for them because it means shifting manufacturing into Southeast Asia that was... (earlier) in China."

Although there could be a short-term boon to Southeast Asia, some analysts warn the long-term may be less rosy.

The region is "very export-driven.... so any shift toward more trade barriers... is not good", Rajiv Biswas, Asia-Pacific chief economist at IHS Markit, told AFP.

ASEAN trade increased by a value of nearly $1 trillion between 2007 and 2014, according to WEF, as the bloc has enthusiastically embraced trade liberalisation -- in contrast to the policies promoted by Trump.

In one of his first post-election moves, the US president pulled out of the sprawling 12-nation Trans-Pacific Partnership (TPP), calling it a job killer.

The current edition of the WEF, which closes Thursday, is officially themed "Entrepreneurship and the Fourth Industrial Revolution", with a focus on how economies should adapt to so-called "disruptive technologies" like automation and artificial intelligence that threaten to replace human jobs.

She is scheduled to speak at the forum Thursday, though organisers have not said whether she will discuss last week's ruling by the International Criminal Court that allows its chief prosecutor to investigate the forced deportation of 700,000 Rohingya Muslims by Myanmar's military as a possible crime against humanity.

Myanmar has also faced international censure over the decision to jail two Reuters journalists for seven years for their coverage of a Muslim massacre, under a draconian state secrets law.