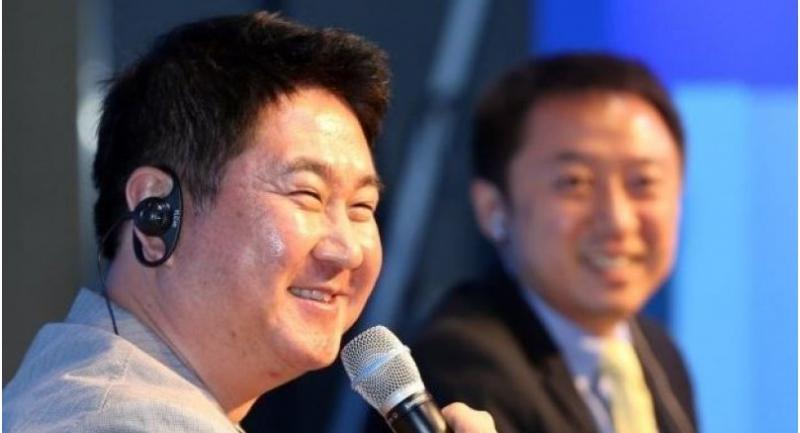 With hundreds of new cryptocurrencies and blockchain projects being released daily, it’s difficult for investors to discern which digital coins are worth backing or are potential scams with no value.

“Stock exchanges like the Kosdaq and Nasdaq all have strict guidelines to determine which company stocks they handle, to protect investors. The same goes for cryptocurrency exchanges,” Lee said during a press conference ahead of Upbit’s inaugural developer’s conference for blockchain technology that kicked off in Jeju Island Thursday.

“There are more than 20,000 crypto coins existing around the world today. It’s one way to list any coin as long as a listing fee is paid. But I believe the role of a crypto exchange is to screen for and pick out which is a good blockchain business and token, with aims to help users find the best investment opportunities,” he said.

In particular, cryptocurrency exchanges like Upbit which support fiat exchanges -- in which crypto coins can be bought with currencies including the Korean won or the US dollar -- can ensure transparency in crypto trading and prevent crimes like money laundering, the CEO said.

Lee, co-founder and former chairman of Korean mobile messaging giant Kakao, joined Upbit as chief executive in January this year, seeing the explosive jump in cryptocurrency prices and trading and the promise of blockchain technology.

And since then, Lee has been steering Upbit through a slew of regulatory uncertainties and a government crackdown on cryptocurrency exchanges. Upbit currently faces a prosecutorial probe over allegations of fraud and potential money laundering, which has yet to conclude.

The Dunamu CEO said he recognized the government’s concerns over crypto exchanges, given a situation where any entity with the baseline technologies is able to create a digital coin exchange platform.

He expressed regret that wrongdoings committed by one exchange reflected badly on the entire industry. To fight this perception, Upbit has been doing its best to strengthen self-established safeguards and measures to protect investors, he said.

In the broader picture, cryptocurrency exchanges will continue to remain an inevitable role in the fast-growing blockchain economy, the executive said.

Decentralized applications based on open blockchain system are able to operate on their own through a token reward system, making the existence of tokens an inevitable part of the business model.

And for the tokens to gain liquidity, they must be promoted to the broader public and be made available for trading, which is where crypto exchanges step in as an important player, according to Lee.

“When considering the role of crypto exchanges, we can think of the stock market. Corporations issue stocks and go public in order to raise funds to run their business, and similarly, blockchain projects are like corporations that issue coins for fundraising,” the Dunamu CEO said.

Looking ahead, Upbit has stated plans to invest 100 billion won ($88.61 million) in the blockchain industry over the next three years, with aims to contribute to strengthening the blockchain ecosystem.

So far, Dunamu, together with Kakao Ventures, has invested in Kodebox, a blockchain startup with a focus on the gaming industry, as well as blockchain tech startup Ozys which has created Allbit, a decentralized crypto exchange. It has also invested in RootOneSoft, which is developing an e-wallet system for cryptocurrencies.

“Blockchain is still a new industry, and there are so many new players and products being released every day,” Lee said. “We plan to continue investing in this sector, as investment is essential to helping the blockchain business ecosystem grow.”

Lee’s remarks came ahead of the Upbit Developer Conference 2018 that is taking place Jeju from Thursday to Friday. Dunamu founder and chairman Song Chi-hyung delivered the keynote speech at the event, marking his first official public appearance since founding Upbit in 2017.