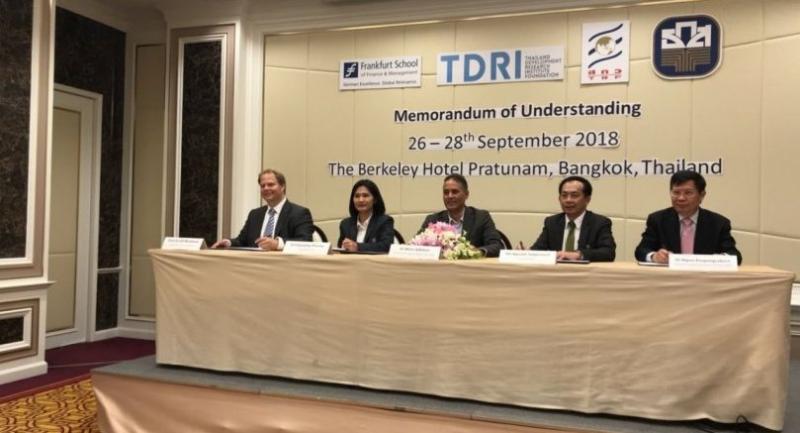 THAI companies have been too slow to adapt to the consequences of climate change, say researchers who have welcomed plans by the Bank for Agriculture and Agricultural Cooperatives (BAAC) to issue green bonds.

The securities will be used to encourage the bank’s borrowers to set up tree plantations.

Awareness of the need for climate change adaptation among private companies and people in Thailand remains very low, said Nipon Poapongsakorn, a distinguished fellow at the Thailand Development Research Institute (TDRI), yesterday. This was despite the increasing damage from floods, drought and other natural disasters over recent years, Nipon said.

"Thailand experienced a big flood in 2011, and flash floods every year, as well as drought, but public awareness about mitigation of natural disasters and climate change adaptation remains really low," he said at the signing of a memorandum of understanding on the Adaptation Finance Fellowship Programme. The scheme provides training for those in the state and private sectors, along with academics, on climate change issues. It is supported by the International Development Research Centre (IDRC) Frankfurt School of Finance & Management, the Thailand Research Fund, the BAAC and the TDRI.

Natural disasters are expected to occur more frequently in the future due to the impact of global warming and the poor are the most vulnerable as they lack the resources to cope with them, Nipon warned.

State-owned BAAC has initiated many projects that seek to address the impact of climate change, such as supporting insurance cover against floods and drought among small-holder rice farmers. The government and the BAAC have been providing subsidies to farmers for their insurance premium payment since 2009.

“Farmers themselves should pay their own insurance premiums because they receive the benefits from it,” said Nipon.

Apirom Sukprasert, president of the BAAC, said that the government wanted to cut its subsidy of Bt54 per rai for each farmer, totalling Bt1.8 billion. The bank allocates about Bt900 million annually to co-subsidise the farmers, working out at Bt36 per rai, he said. “We will discuss with the Finance Ministry and farmers about the subsidy cut for the next rice crop, but we worry that only a few farmers would continue engaging in the insurance programme,” said Apirom.

Some farmers have started to pay the insurance premium themselves in case they want to extend insurance coverage to more of the land on their rice farms, he said.

The government this year aims to have the insurance scheme cover 30 million rai of rice farms out of a total 60 million rai under rice cultivation nationwide. The coverage now is 27.6 million rai.

Regarding the green bonds, the BAAC is pondering how it will proceed with the plans for the issuance, which would finance the establishment of tree plantations by farmers who borrow money from the bank, Apirom said.

The agricultural reform committee is drafting a law to promote tree plantations. In a related move, the National Legislative Assembly is vetting amendments of the forest law, paving the way for farmers to grow rare tree species and expand opportunities for business in some activities that have been restricted.

The green bonds would raise funds from investors and the proceeds would be allocated to farmers who will grow the trees before having them processed for timber or sold in the carbon trading market, Apirom said.

The BAAC already runs a tree-growing project by giving subsidies to farmers who grow trees on their land. The government recently approved the BAAC's proposal to allow farmers to use the trees as loan collateral. Some 6,800 communities are participating in the scheme and 11.7 million trees have been grown.

Bhim Adhikari, a senior programme specialist at IDRC, said that the private sector in Europe was most active in implementing climate change mitigation and adaptation as countries embrace clean technologies such as solar-cell energy. In Africa, many countries have attracted more private investment in this area, he said. Many pension funds worldwide are looking for investment opportunities in this area as they want to be responsible in their responses to climate change.

Bhim said some companies in Thailand and the Philippines are also looking for business opportunities in relation to climate change issues.

Nipon suggests that Thailand should learn from the warning system implemented by the Philippines and Hong Kong when Typhoon Mangkhut struck recently. He also said the government should learn from the cave rescue operation in Chiang Rai province, as this effort provided valuable information about the management of tourist sites, flash flood warning systems and rescue planning.