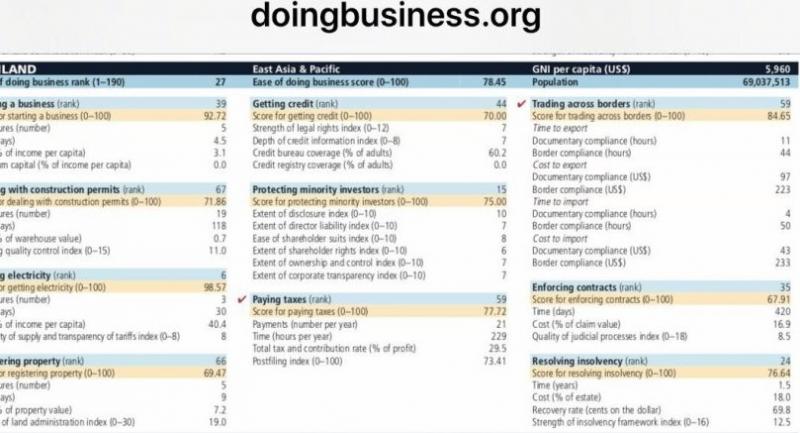 THAILAND’S EASE of Doing Business(EODB) score has seen an improvement but its ranking has dropped as other economies have implemented reforms much faster, according to the World Bank.

The country’s ranking dropped to 27th from 26th place in 2017 but the score, a measure of the country’s progress towards best practices, actually improved to 78.45 this year, up from 77.39 last year.

The Kingdom remains among the top 30 of the 190 economies in the EODB rankings, according to the World Bank Group’s Doing Business 2019: Training for Reform report.

“Although our ranking is lower this year our score has risen,” Pakorn Nilprapunt, secretary-general at the Office of the Public Sector Development Commission, said yesterday.

Thailand has made significant progress in key four areas:

-Starting business became less costly due to a fixed registration fee of Bt5,500;

-Getting electricity was made easier by streamlining the number of procedures needed to obtain a new connection and making electricity price changes more transparent;

-Paying taxes was made easier by enhancing the online platform for calculating and filing corporate returns, resulting in a reduction in time spent filing tax returns from 156 hours to 123 hours annually;

-Trading internationally was made faster by the introduction of the e-matching system for electronic cargo control, thus reducing time for compliance at borders.

“There is room to improve Thailand’s ranking next year as the Revenue Department has recently introduced e-donations and government agencies have been implementing e-payments, which would make it more convenient for people next year,” said Pakorn.

Changes will also be made to many existing laws that impose a high cost for people running business and daily lives, he assured.

The areas where Thailand’s rankings are low are:

-Trading across the border (59)

Ruenvadee Suwanmongkol, the director-general of the Legal Execution Department, said the Justice Ministry was drafting a cross-border insolvency law, aimed at better protection for creditors and it would be in line with international practices.

The draft law was approved in principle by the Cabinet and is currently being scrutinised by the Council of State, a legal adviser to the government. The Justice Ministry will hold public hearings on the draft law on November 19, Ruenvadee said.

The Justice Ministry also plans to revamp the execution of legal activities – the Legal Execution Department will act only as regulator and will allow the private sector to work in carrying out the actions. This is similar to what happens in Japan, whose system has proved to be effective in asset recovery for creditors and speeding up the liquidation process.

The report found that resolving insolvencies was the most challenging issue around the world.

The World Bank said that “Doing Business 2019” saw a historic number of reforms worldwide in getting electricity, with East Asia and the Pacific countries accounting for the highest share of reforms. The Thai economy is among the strongest performers on these indicators, achieving an EODB score of 98.57 relative to global best practice.

“The World Bank looks forward to continuing our support to help the country succeed in adopting global best practice, especially in areas where there is room for improvement.” said Mara Warwick, the World Bank’s country director for Thailand, Brunei, Malaysia and Philippines